Matthew Settle is an American actor best known for playing the role of Rufus Humphrey on the CW teen drama series, Gossip Girl, and Captain Ronald Speirs on the popular HBO series, Band of Brothers. Taking about his personal life, he was previously married to an actress and model, Naama Nativ with whom he shares a daughter, Aven Angelica Settle. They got a divorce in 2011.

Matthew Settle was born as Jeffrey Matthew Settle on September 17, 1969, in Hickory, North Carolina, the United States of America, to parents Robert Settle and Joan Settle. His father was a Baptist minister.

He was raised along with his three brothers and two sisters, and he was the youngest of them. He is of American nationality and of English and Scottish descent. He belongs to the white ethnicity.

Career: Appearances In Gossip Girls And Band of Brothers

Matthew Settle made his Broadway debut with the role of Billy Flynn in Chicago: The Musical on April 19, 2010; he played that role till June 13, 2010.

He was also featured in I Still Know What You Did Last Summer starring Jennifer Love Hewitt, Mekhi Phifer, Brandy Norwood, and Freddie Prinze Jr.

Still Know What You Did Last Summer star has also guest-appeared as a reporter in an episode, "Storm," in season 7 of Law & Order: Special Victims Unit.

Settle played the role of Rufus Humphrey on the CW teen drama series, Gossip Girl, From 2007 to 2012.

His other film and television credits include HBO miniseries Band of Brothers, TNT miniseries Into the West, film Beneath, and film The Celestine Prophecy.

Being a successful Broadway, film, and television actor, Matthew Settle earns a considerable amount of money from his career. The Gossip Girl alum has an estimated net worth of $4 million, according to the Celebrity Net Worth.

His salary has not been disclosed. However, according to the WetPaint website, actors on Gossip Girls make approx. $50,000 per episode on average.

Moving towards the personal life of Matthew Settle, as we mentioned earlier, Matthew Settle was previously married to Naama Nativ Settle. His former wife is an actress and model who has appeared in the 2008 action comedy film, You Don't Mess with the Zohan.

During an interview in 2007, Settle revealed that he had eloped with Nativ in 2006. He was 37 years old at the time. The couple welcomed their first child, daughter Aven Angelica Settle in 2009.

The former husband-wife duo got a divorce on May 10, 2011, citing irresponsible differences. He then started dating Maria Alfonsin and the couple also has a daughter together named Nalu. 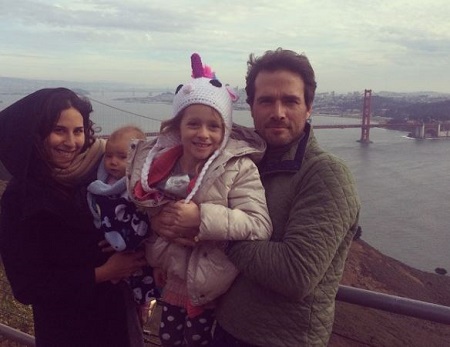 Settle is also often linked with his Gossip Girl co-star Kelly Rutherford. There is a huge fan base who thinks that their favorite couple Rufus and Lily are dating in real life too, however, there is no confirmed news.