Matthew Kai Stonie who is shortly known as Matt Stonie is a Competitive eater who holds the 3rd rank in Major League Eating. He has participated in several eating competitions and has also won the Nathan's Hot Dog Eating Contest in 2015.

Matt Stonie was born as Matthew Kai Stonie on May 24, 1992, in San Francisco, California, of the United States of America. He is of Amerian nationality while his ethnicity is European and Japanese. He has a younger brother named Morgan Stonie.

Talking about education, he completed his schooling from Evergreen Valley High School based in San Jose, California. After the completion of his high school, he joined Mission College in Santa Clara in California from where he graduated in food and Nutrition.

Matt Stonie has a net worth of around $1 million which he has acc u mulated from his career as a competitive eater. As per the sources, the competitive eater makes around $500,000 per year from the sponsorships as well as from competitions. 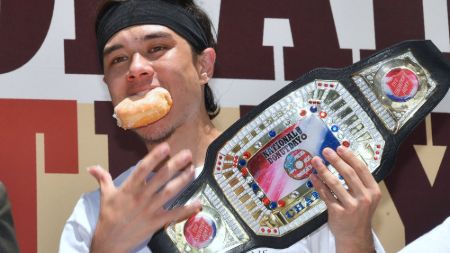 In addition to this, he also added to his worth from Twitch Online Stream.

The competitive eater, Matt Stonie is also involved in social work. He donates some of his earnings because he believes that hunger is a big issue in the United States and around the world.

"What we do on the stage is gluttony, but whether I eat two hot dogs today or 60, it's not going to make a difference anywhere else. Major League Eating does a lot for charity. I've generated a few thousand dollars for charity from my YouTube videos.

Since childhood days, Matt Stonie loves eating foods but never thought to make it a career. Later on, he started participating in small competitions for free food. Later on, he decided to make it a professional career after he ate 62 hot dogs in just a matter of 10 minutes during his high school days.

He became famous after he beat the 8-times defending champion, Joey Chestnut Nathan, in the 2015 Hot Dog Eating Contest. As of now, he is known as the youngest member of the competitive eating community.

What Is Matt Stonie's Relationship Status?

The 28 years old Matt Stonie is one of those who has preferred to keep his personal life away from the media. Whether he is dating or married is a big question mark for all of his fans. Although he is active in the social media platforms, he has not hinted anything about his love life.

Also, there is no history regarding his dating life, girlfriend, or any other affairs to this date. Well, he has managed to keep his personal life to himself and does not have any rumors as well.