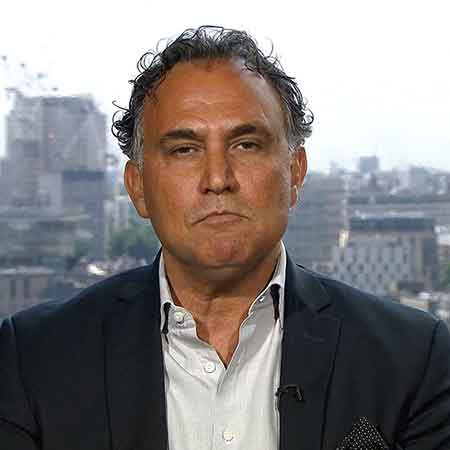 Marwa Bishara is the Israeli senior political analyst of Al Jazeera English where he works as an editor and host of the series, Empire where he examines the global agendas and goals. He is also a writer.

Marwana was born in 1969 in Nazareth, Israel to a school teacher mother and a health inspector father. His parents raised him with his brothers, Azmi Bishara and Rawia Bishara. Azmi is an Arab public intellectual and a political philosopher whereas Rawia is a well-known chef and a restaurateur.

In an interview, he told about his early age:

''Growing up in Nazareth, an Arab in a Jewish state, a secular Christian in a traditional Muslim society, a leftist in a Baptist school, I learned firsthand how managing ideological, religious and national differences helps us evolve peacefully. Succumbing to them generates fundamentalism and antagonism. Applying brute force to overcome them-as Israel, my country, has done to my people, the Palestinian Arabs-fails utterly.''

Bishara attended Nazareth Baptist School along with his brother Azmi.

Initially, Marwan Bishara worked as a lecturer in International Relations at the American University of Paris and the Ecole des Hautes Etudes en Sciences Sociales.

Moreover, Bishara also wrote several articles and books. His writings are published in several well-known newspapers like The New York Times, The Nation, The Guardians, and Le Monde among others.

''The Invisible Arab is an insightful and absorbing read for inquiring minds.''

''Bishara…provides a compelling and spirited history of the modern Arab nation, from colonial liberation to the recent revolutions….Fast-paced, impassioned, and eloquent.''

Besides, Bishara earns a good amount from his career. As of 2018, he has an estimated net worth of $1 million. As per some online sources, a political analyst averagely earns a salary that ranges from $70k to $134k.

He is also involved in several charitable works. He serves on the Broad of Trustees of a UK-based charity, The Galilee Foundation that helps to promote development and equality of the Palestinian indigenous community of Israel.

Marwan Bishara is confidential when it comes to his relationships and love life. Bishara prefers to hide his personal life far from the limelight. His fans speculated that he is married. He, however, has not confirmed anything about having wife and children.