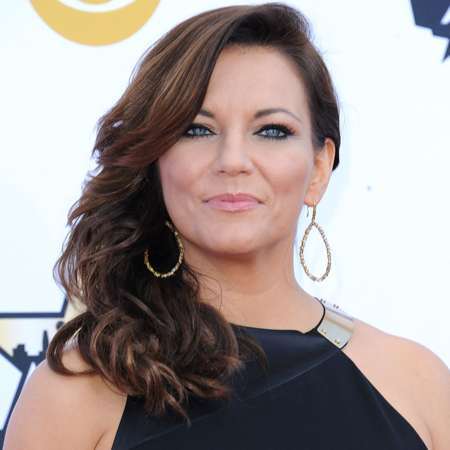 Martina Maria McBride, an American country singer-songwriter, is known for her soprano singing range and her country-pop material. Country singer Martina McBride started her career for Garth Brooks in the 1990s and in no time, became one of the most successful female country singers of all time. The renowned artist has released a number of evergreen songs and chartbuster albums.

Martina McBride was born as Martina Mariea Schiff on July 29, 1966, in Sharon, Kansas to parents, Daryl and Jeanne Schiff. She holds American nationality and regarding her ethnicity, she is a White American.

She grew up with her three siblings, Martin, Steve, and Gina. Martin and Steve are her band members. Her father was a farmer and a cabinetry shop owner. He introduced her to country music and she started learning it. Martina is of White American ethnicity and holds an American nationality.

Martina began singing alongside other great artists at a tender age. At the age of eight, she already had a band named The Schiffers. She then went on to perform with The Penetrators. She met her husband John McBride when she was renting space from him for her rehearsals.

Martina then moved to Nashville, Tennessee in 1989 to start her career. She released her debut album in 1992 through the RCA Nashville Label and was titled The Time Has Come.

The following year she released her album The Way That I Am. In the coming years, she went on to release Wild Angels, Evolution, White Christmas, Emotion, Martina, Timeless, Waking Up Laughing, Shine, and Eleven.

The next year, she released Wild Angels, and the title song became her first No. 1 single. That same year, she was worked into the Grand Ole Opry. Since then, she’s been active in American country music. Eight of Martina’s studio albums and her two compilations have garnered an RIAA Gold certification. She has sold over 14 million albums.

She’s released thirteen studio albums and several tours to date. Her singing style is a pop-style crossover sound, same as that of Shania Twain and Faith Hill.

She has won many awards including the Country Music Association Award, Academy of Country music Award, American Music award, Billboard Music Award, ASCAP, Teen Choice Awards, and much more. Most importantly, Martina has been nominated for the Grammy Award 14 times already. Her fans are eager to see a Grammy Award in her hand.

Martina McBride's Net Worth And Earnings

Martina McBride's net worth is estimated to be a total of $38 million, which shows her huge earning from her singing career. She has sold over 20 million albums worldwide and five of her albums have gone platinum, and two have gone double platinum.

In December 1999, the singer bought the house which stands on 11,865 square feet and is two stories. The house features six bedrooms, eight bathrooms with a swimming tennis court, and a long private driveway. The worth of the house is said to be $3,200,000.

McBride is a married woman. She is married to John McBridge, a sound engineer. The couple married on 15th May 1988. They have been married for around 30 years now.

To date, their relationship is going strong. There have been no reports of violence, infidelity affair or divorce from both sides. Martina always seems happy with her spouse and three lovely children named Delaney, Emma, and Ava. Martina has cut on many of her tours so that she could spend time with her kids.

She unlike many other celebrities has had a short dating history. Martina is reluctant in speaking about her past relationship in front of the public. The tabloids have also kept away from it, considering and respecting the fact that Martina is married to John McBride who is a sound engineer.

Her intense looks attract many men towards her. She has a huge fan following and her bio can be found on various social media sites like Facebook, Twitter, and Wikipedia.