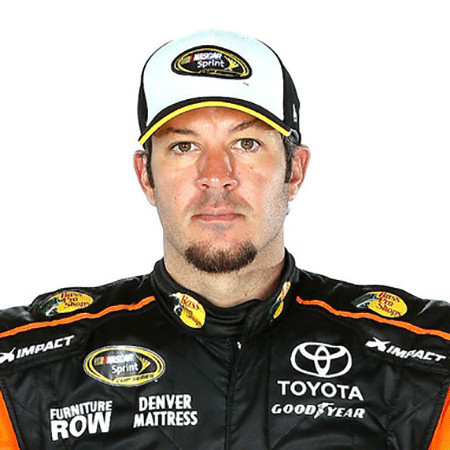 Martin Lee Truex Jr. was born on June 29, 1980, in Trenton, New Jersey to parents Linda Truex and Martin Truex Sr. He was raised in Mayetta, New Jersey. He has a brother named Ryan Truex, who is a former champion in K&N Pro Series East.

Martin got inspired by his father who was a former race winner in the NASCAR K&N Pro Series East. Having been brought up in the racing environment and being a boy as well, being interested in racing stuff is not surprising.

Martin holds American nationality and as far as his ethnicity is concerned, he is a White American.

Martin Truex Jr. started his career in racing in Central New Jersey with the New Egypt Speedway. He began racing in the NASCAR Camping World East Series in 2000. Martin Truex Jr won 5 races in the four years with NASCAR Camping World East Series. He also raced in Busch North Series where he ran three full seasons. He claimed 13 poles and 5 wins in his seasons.

Martin Truex Jr. started his first career Cup Race in 2004 for Dale Earnhardt, Inc (DEI)at Atlanta Motor Speedway. He stayed in Busch Series and defended his championship in 2005. He won his first win at Daytona International Speedway in July 2005.

Micheal Truex Jr. drove No.56 Toyota Camry for Micheal Waltrip Racing from 2010 till 2013 seasons. In 2014, he signed the contract with Furniture Row Racing and has been driving for it.his last race was 2016 Ford EcoBoost 400 in Homestead.

Thirty-six years old Michael Truex Jr. is not married but does not mean he is single. He is in a romantic relationship with his girlfriend Sherry Pollex since 2005. The couple established Martin Truex Jr. Foundation in 2007 which supports children with pediatric cancer.

His girlfriend was diagnosed with a Stage III ovarian cancer in 2014. Martin Truex Jr. truly loves her, therefore, he is there for her and taking her good care. Martin and his long-time girlfriend Sherry have been dating for many years now and still sharing the loving relationship.

His fans are increasing day per day. His short biography can be found in Wikipedia and NASCAR.com. Besides, other internet sites also have stored news, biography, and pictures of him to make easy for his fans to know about him more.

Martin Truex Jr. earns a million-dollar salary and has a very high net worth. His estimated net worth as of 2019 is $30 million, according to celebrity net worth.

In the year 2006, the NASCAR driver bought the house for $1.5 million, in Mooresville, North Carolina, United States. The house features 4 bedrooms and 6 bathrooms. He has also a huge car collection.