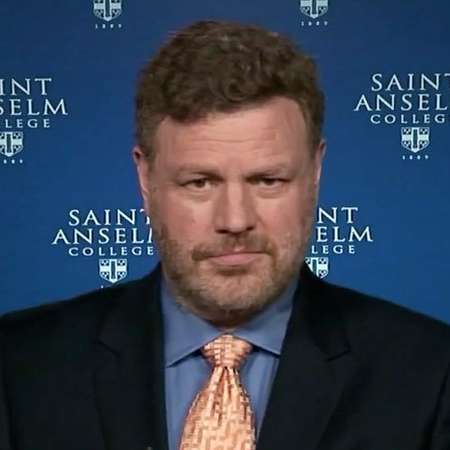 Mark Steyn is a conservative Canadian author and political commentator who has written five books, including America Alone: The End of the World As We Know It, a New York Times bestseller.

Steyn is a married man and has three children. He lives and works mainly in Woodsville, New Hampshire.

Canadian author, Steyn was born on December 8, 1959, in Toronto, Ontario, Canada. Mark studied at King Edward's School, Birmingham, in the United Kingdom. He left school at the age of 16 and started to work as a disc jockey.

Mark holds Canadian nationality and regarding his ethnicity, is White.

In 1986, Steyn became the musical theater critic at the newly established The Independent. In 1992, the mark was appointed for film critic The Spectator. After writing continuously about the arts, Mark shifted his focus towards political commentary and started to write a column for The Daily Telegraph.

Mark had started his journalistic career working as a disc jockey. International bestselling author, Mark Steyn has a wide range of publications; his debut book was Musical which was published in 1999. He has written different books and bios such as The Face of the Tiger (2002), A Song for the Season (2008), Climate Change (2010), and America Alone (2011).

Among all of his books, After America (2011) is a top-five bestseller in the U.S. and a number-one bestseller in Canada. Steyn serves as National Review’s Happy Warrior in the United States. In July 2005 column for National Review, Mark had criticized the editor of the Australian newspaper The Age, Andrew Jaspan.

Mark Steyn has recorded numerous podcasts and has contributed to the center-right blog Ricochet.com.

Mark Steyn's Net Worth And Salary

Mark Steyn's net worth is around $1 million at present. He earns a decent amount of salary from his career. He has also authored a number of New York Bestsellers books like  America Alone: The End of the World As We Know It. It is priced at $13.49 for Hardcover and $12.03 for Paperback, on Amazon.

In 2006 Mark was awarded the Eric Breindel Award for Excellence in Opinion Journalism for writing "best reflects the love of this country and its democratic institutions". In 2007 he achieved the Center for Security Policy's "Mightier Pen" award. Mark received the Sappho Award from the International Free Press Society in Copenhagen, Denmark in 2010.

Mark Steyn got married to an editor he met at the Independent. Mark and his spouse have 3 children and they live happily in Woodsville, New Hampshire, and are Catholic. There is no news and rumors related to his previous relationships, he is happily living with his wife and children.

He had no relationships before his marriage and in the present context, he has no marital issues with his wife. The union between him and his wife is going well and seems like they are made for each other.

Mark Steyn says, “I don't think Donald Trump is a conservative. I think his line on China, for example, is that he's going to talk tough to China. China didn't create Social Security, Medicare. China isn't spending a fifth of a billion dollars every hour that it doesn't have.”