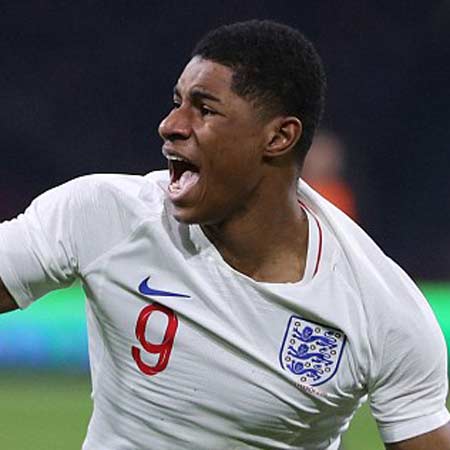 The Manchester United ace Marcus Rashford is often described as one of the best modern-day advanced playmakers because of his technique, wide range of pa s sing, as well as long-range shooting skills. After graduating from the youth academy, the footballer made an incredible start to his football career appearing as a key squad player at Manchester United.

As a forward for English top flighted club Manchester United since his early career, Rashford received more recognition and won several prestigious accolades as well as broke several records. With the club, he won four titles including his first European trophy when the club won the Europa League title,  on 24 May 2017. Also, he will appear for his nation in this year's World Cup.

Marcus Rashford was born in Wythenshawe, Manchester, England, on October 31, 1997. He is the son born to Melanie Rashford and Robert Rashford. He was raised up in his hometown Wythenshawe along with his two brothers Dane Rashford and Dwaine Maynard.

Rashford attended Ashton-on-Mersey School. He joined the junior football club Fletcher Moss Rangers at the very early age of 5 and became the center of attention due to his settler performance at such an early age.

At the age of seven, Rashford went on to join the Academy of the prestigious club Manchester United. He belongs of British nationality and regarding his ethnicity, he is from a mixed ethnical background.

The footballer first came to the limelight and grabbed huge attention after he scored twice for Manchester in the second half of the match against Midtjylland though he was a late addition to the team after Anthony Martial was injured in the warm-up.

Rashford's two goals in the match not only led the team to emerge victorious in the game but also made him the club's youngest ever scorer in European competition, breaking the previous record of George Best.

Three days later he made his English Premier League debut against Arsenal and netted 2 goals becoming the third-youngest scorer for the club in the history of the Premier League to achieve this feat after Federico Macheda and Danny Welbeck.

Rashford also netted a goal in the Manchester derby and helped his team to defeat Manchester City for the first time in an away league match since 2012. During the FA Cup, he scored a fantastic curled goal in a 2–1 win over West Ham on 13 April 2016. He led his team to win the club's 12th FA Cup win defeating Crystal Palace in the final and received his first piece of silverware for his vital role throughout the tournament.

The player won his third trophy with the club coming on as a 77th-minute substitute in a 3-2 win against Southampton in the EFL Cup Final. With the club, he also won his first Europa League title after they faced Ajax in the final and won by 2–0. On 24, October 2016, he was the runner-up for the Golden Boy Award for the best European player under the age of 21.

Rashford scored his first 2017-18 season goal in a 2–0 win over Leicester on 13 August. He was listed third in the race for the Golden Boy Award behind the winner Kylian Mbappé and FC Barcelona's Ousmane Dembélé.  On 10 March 2018, Rashford scored all two goals in a 2–1 victory over rivals Liverpool.

Marcus Rashford became a part of the UEFA Euro 2016. He netted the opening goal in a warm-up match against Australia which ended in a 2–1 victory making him the youngest English player to score on his international debut, and the third youngest all in the world.

Rashford became the youngest player ever to represent the United Kingdom at the European Championship, breaking Wayne Rooney’s UEFA Euro 2004 record by four days, at the age of 18 years and 229 days. He came in on 73-minute as a substitute for Adam Lallana and scored his goal in a 2–1 victory over Wales during the 2016 UEFA Euro.

At such a young age Marcus Rashford has gained a lot of popularity as well as collected a decent amount of money from his already flourishing career. Though the exact amount of his net worth is still under review, per some reliable online sources is speculated to be more than $3 million.

Rashford has been actively playing one of the key roles for English giant Manchester United and won a number of prestigious trophies with the club as well as several individual accolades. And as part of his standard wage, he earns  £55,000 ($73,851.25)-a a-week and over £ 2 million (2,685,690.00 US dollars)-a year from the club.

Marcus Rashford is yet to be married and neither has any child. He was rumored to be dating Lucia Loi in 2017. His alleged girlfriend Loi resides in Manchester and comes from an Italian descent family. The two were spotted at several public places but neither Rashford nor Loi have confirmed their relationship.

It was also reported that the footballer was spotted on a dinner date with pretty Courtney Morrison at the Lancashire resort’s Morecambe Hotel in May 2017.

There were speculations that Rashford and the stunning brunette, Lauryn Goodman, 27, were dating. Goodman sparked their romance rumors when she used to attend several matches supporting him.

But later Goodman said that she is not dating Rashford, 20. Ten mysterious things regarding Marcus Rashford.