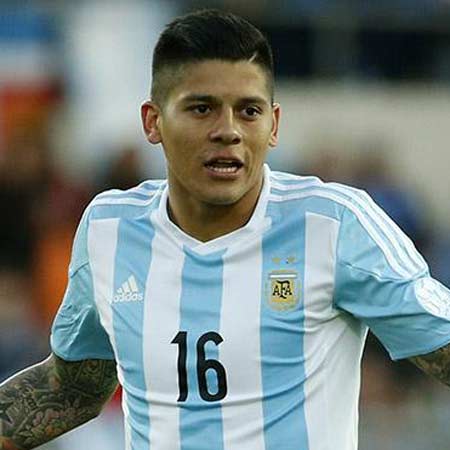 An aggressive, accomplished Argentine defender, Faustino Marcos Alberto Rojo is well known for his tough tackling style and speed. He plays for English based football club, Manchester and the Argentine national squad.

Started his career at the local club Estudiantes de La Plata, he won the Copa Libertadores with the club in 2009. Also, he played in the Club World Cup Final later that year.

Rojo made his senior debut for Argentina in 2011 and has earned over 50 caps for his country. He was part of the Argentine team that reached the 2014 World Cup Final and has been included in Argentina’s 35-man provisional squad for the 2018 World Cup.

Early Life and Career of Rojo

Marcos Rojo was born on March 20, 1990, in La Plata, Argentina. He is the son of Carlina Rojo and Marcos Rojo Sr., his father. He grew up in a small town El Triunfo in La Plata, which is an impoverished city 40 miles from Buenos Aires.

In a bid to make him a kickstart in his career in a non-crime prone area, Rojo's parents took him to the Estudiantes LP where he got registered as the youth footballer at the age of 4.

In his early age, the club coach Gabriel San Millan recognized Marcos' potential and helped him to develop his talent at his first professional club.

Rojo joined Estudiantes de La Plata at the age of ten. He signed his first professional contract and was promoted to the club’s main team in 2009. He spent three years with the club, making 43 appearances, scoring three goals for the team. He played in the 2009 FIFA Club World Cup Final, coming on for extra time as Estudiantes lost 2–1 to FC Barcelona in Dubai.

Rojo moved to Spartak Moscow and then joined Sporting Lisbon club after winning the Copa Libertadores. He represented his nation at the World Cup 2014 finals in Brazil.

Rojo started his career from the Russian professional football club, Spartak Moscow. He signed a five-year contract with Spartak Moscow in December 2010. On 20 April 2011, he scored his only goal for Spartak Moscow, netting the opening goal of a 2-1 defeat Krasnodar in the quarter-finals of Russian Cup.

CAPTION: Marcos Rojo has 'For My Family' above his chest and the Copa Libertadores trophy SOURCE: Pinterest

Rojo moved to Sporting CP club from Spartak Moscow in July 2012. He signed a four-year deal for £3.5 million ($4.6 million) with the club.

Rojo made his debut for the club on 19 August 2012 at Primeira Liga. He played the entire match receiving a yellow card in a 0-0 draw with Vitoria de Guimaraes. On 7 October, he received his first red card in a league match against Porto, picking up two cautions within the three minutes as Sporting fell 2-0 defeat.

Rojo missed three matches for United due to difficulties in gaining a work permit, because of pending criminal charges in Argentina. He was alleged to have had an altercation with a neighbor in 2010. He was granted a work permit by the UK Border Agency to work in England on 4th September.

Rojo scored his first Premier League goal on March 4, 2017, opening a 1-1 home draw against Bournemouth. He suffered a season-ending cruciate ligament injury on April 20, during a 2-1 victory over Anderlecht in quarter-finals of Europa League.

Rojo earned his first cap for his country in 9th February 2011, in a 2-1 friendly win against Portugal at the Stade de Genève, Geneva. He was part of the Argentine squad at the 2011 Copa America which was hosted by Argentina.

Rojo was also part of the 2014 FIFA World Cup squad that lost to Germany in the final.

During his international career, he scored his first international goal against Nigeria. The country reached to the final's before losing to Germany and he was only Argentinean whose named is in the Castrol Index Top 11 for the tournament.

The Argentina professional football player possesses the net worth of over $4 million. He receives an annual salary of £70,000 from Manchester United.

Rojo is a married man and has a daughter. He married Eugenia Lusardo, a lingerie model based in Lisbon. The couple has two daughters namely Morena Rojo and Martina Rojo.

Rojo has shared many pictures with his family on his Instagram account. The family of four resides in Argentina.

Rojo has a number of tattoos, including the English words "Pride" and "Glory" on each thigh.

Rojo had an affair in December 2014, with a woman he had met at a nightclub. He accused her of blackmail and took out an injunction to stop newspapers publishing his name in the story.

The injunction on his name was lifted in April 2015 due to concerns that other footballers could be suspected of the affair, but it remains in place to prevent the release of images of Rojo.