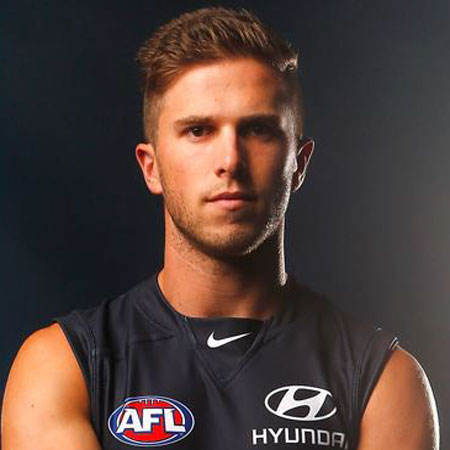 Marc Murphy was born on 19th July 1987 in Melbourne, Australia. He is a former football player. He plays in the Australian Football League for the Carlton Football Club.

Marc went to Whitefriars College in Donvale. During his junior college, before playing for the TAC Cup, he played for the Doncaster Football Club and for the Beverly Hills Junior Football Club.

At the 2005 AFL under 18 Championship Marc represented the victorious Vic Metro team. In the tournament, he also won Larke Medal for the best player.

Marc Murphy made his debut in AFL in 2006. His quality performance got him nominated for NAB AFL Rising Star Award. His debut performance impressed the pundits.

He was upraised to the 8th man leadership group for 2007 season. He played the season with same firm he had in his 2006 season. He came back with a significant bulky frame for the 2007/08 season.

March was selected for International Rules Series for Australian against Ireland in 2008. He established himself as one of Australia’s best in the first game. The following year, he was able to brand himself as one of the best midfielders. He has scored total of 31 goals in his 23 matches.

In 2011, he was named in the All-Australian team. He also became ‘The Age Player of the Year’ and AFL coaches Association Champion’ of the year in 2011. He became the caption for the Carlton Football Club in the year 2013.

2014 was an okay year for March Murphy, he averaged 21 disposals in 20 games. During the 2016 pre-season there were rumours regarding discontinuation of his captaincy, however, Coach Brendon Bolton dismissed those rumours by appointing him as the captain for the 4th season. Marc got an ankle injury by the end of the season.

John Murphy, Marc’s father was a Hall of Famer as well as the legend of the Fitzroy Football Club.

Marc Murphy dated an Australian model, blogger as well as an actor Jessie Habermann since 2012, Jessie is now his wife. After dating for more than three years he proposed in 2015 September and the couple got married in 2016 December. The marriage ceremony took place in rooftop venue Luminare in South Melbourne.

The couple got married in a lavish Melbourne wedding. As their entrance song, they chose Kanye West and Jay Z’s hip hop ‘N*** as in Paris’. Jessie’s wedding dress was of Oglia-Loro Couture’s which took four months to make.

As the average salary of AFL players rose up to $300k, it is speculated that Marc Murphy’s salary is in six figures (most possibly above $1 million)