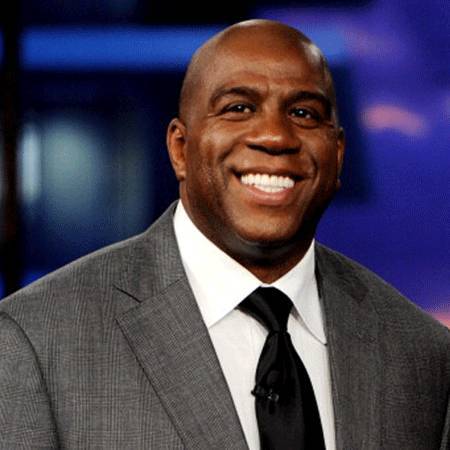 Earvin Johnson Jr. was born on August 14, 1959, in Lansing, Michigan, the fourth of Earvin and Christine Johnson's seven children. His father worked at an auto factory during the day and hauled trash at night to make extra money. In 1977, Johnson and his Everett High School team won the state championship.

Magic Johnson was selected first in the 1979 National Basketball Association draft by the Los Angeles Lakers. He became the first rookie to start in an NBA All-Star game. With the height of six feet nine inches, Johnson became the first big man to excel at point guard, a position usually reserved for smaller players. He was one of the most popular players in the league.

In Magic Johnson's first season with Riley, the Lakers won another championship, with Johnson again winning the playoff MVP award. In 1985, the Lakers won their third NBA title, defeating Bird and the Boston Celtics. The Lakers also won championships in 1987 and 1988.

During Johnson's twelve years with the Lakers, the team won five championships. Magic Johnson was chosen playoff MVP three times. Magic Johnson was a twelve-time All-Star and the 1990 All-Star game MVP. He averaged 19.7 points per game in 874 games. In October 1996 Jonson was named one of the fifty greatest players in the history of the NBA.

Magic Johnson become an investor and board member for The Marvel Experience, a travelling entertainment show that includes an animated, 4D and multimedia. He once also owned 105 Starbucks and a 4.5% stake in the Lakers. He sold both and collected a reported $100 million in 2010. In 2012, he and Guggenheim Partners, an investment firm, purchased the Los Angeles Dodgers for $2.15 billion, according to the MLB, which is the most money paid for a North American sports franchise.

In 2006, MJE scored a deal with Sodexho, the world’s largest food services and facilities management company. With an estimated net worth of $500 million, and with MJE worth a reported $1 billion, Magic Johnson is one of the most successful black businessmen in the U.S.

Magic Johnson was in a brief relationship with Melissa Mitchell which lasts only for a summer which resulted in the birth of a son in 1981.He was married longtime friend Earletha "Cookie" Kelly. They had a son in 1993 and adopted a daughter in 1995. He is living now with his wife and family.

Magic Johnson has an estimated net worth of $500 million. He has also started social working after he got HIV. He awarded more than $1.1 million to community-based organisations that focus on HIV/AIDS education and prevention. We don’t have any information about his salary.