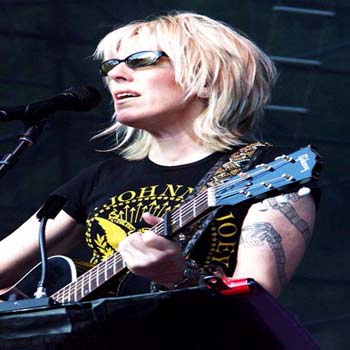 Williams was briefly married to Long Ryders drummer Greg Sowders during the 1980s. She married Tom Overby, an executive from Best Buy's music department, in September 2009. The marriage ceremony was performed on stage by her father.

Lucinda Williams was born on 26th January 1953 in Lake Charles, Louisiana in the United States. She is an American songwriter as well as country music, folk, rock, and blues singer. She had recorded her first albums in 1978 to 1980. The album was in blues style and traditional country style. The album had received very few attention the media, radio or public.

She is known for her working slowly. She had recorded her next album named Sweet Old World after several years. But later on in 1998 she had got the greatest success with Car Wheel on a Gravel Road. The album had a broader scope of fusion songs like rock, country, blues and American into a very distinctive style which she still manages to remain consistent and have commercial sound.

In 2002 she had also named as America’s best songwriter by a magazine named TIME.

Williams is the daughter of Miller Williams who is a literature professor, an amateur pianist and also a poet. Her parents got divorced in the mid-1960s and her father gained custody of her and her younger sister and brother.

Williams had started writing when she was just six years old and showed her interest in her early age. She learned to play guitar when she was 12 years old. When she was 17 years old she gave her first ever live performance in Mexico being the part of a duo with her friend Clark Jones who was a banjo player.

Williams at the age of 20 performed in public in a folk-rock and country blend music genre. She recorded her first album in Mississippi in1978 whose name was “Ramblin”.This album contained songs of blues and country genres and her next album Happy Woman Blues, which had songs of her own choices. None of her albums were much praised.

In 1988, another album was released of her own name. This album’s one song titled “Change the Locks” gained some attention. Another song named Sweet Old World from album Chameleon in the year 1992 and was her best of her as a songwriter in 1990s.She won Grammy Award for her song named  “Best Country Song” in the year 1994.

Her other albums are World Without Tears, Gentle on my Mind, Little Honey etc.IN 2007 she had written more than 27 songs for new album West.ON March 2011, she also did an album, Blessed.

In 2012, she was featured in a campaign which was for the support a cause for women inspired by Nicholas Kristof and Sheryl WuDunn.In 2012 and 2013 She also went on a tour of US with a guitarist Doug Pettibone.

Lucinda Williams' Net Worth And Salary

Lucinda Williams' net worth is $15 million at present. She is earning good from her career. She started writing songs at the age of six.

Williams announced her engagement with Tom Overby who is a former Universal Music Group/ Fontana Distribution music executive. Though she had stated to reporters that she will be married to Tom in the same year, she still said Tom was her fiancé in 2008.

She had performed at First Avenue in Minneapolis and got married to Tom on the stage in front of her fans On 18th September 2009. Williams had performed in Fayetteville on date September 19th and 20th at George’s Majestic Lounge.

Miller Williams her father had opened this show as he was in the attendance. The reason for those special shows has not been mentioned yet while the date is the remark for her of the first anniversary of her official marriage.