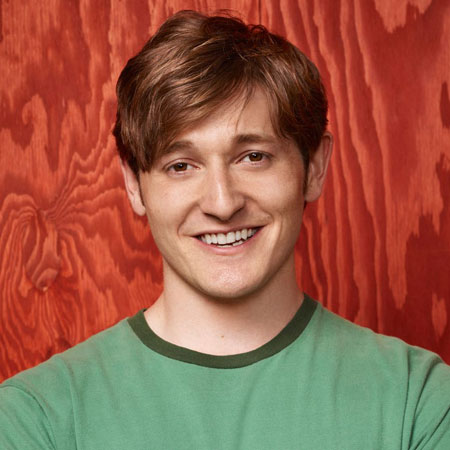 Lucas Neff is a successful American actor. He is well known for his character as Jimmy Chance on the Fox network's sitcom Raising Hope. He also portrayed important roles in several movies including The Beas, Amigo, Fear, Inc. and Downward Dog as well. Lucas and his co-star Martha Plimpton are a member of Steppenwolf Theatre.

Lucas Neff was born on November 7, 1985, in Andersonville, Chicago, Illinois, United States. He is the son of Meade Palidofsky and Alan. His father is a lawyer and novelist and mother is a founder of Storycatchers Theatre.

Lucas Neff was brought up in Andersonville area of Chicago, Illinois along with younger brother. He belongs to American nationality and ethnicity wise, he is of Irish and Jewish descent. In the year 2004, he graduated from Whitney M. Young Magnet High School.

After that, Lucas Neff moved to the University of Illinois at Chicago and accomplished her bachelor of arts in Theater in 2008. After completed his education, he went to Steppenwolf Theater Company in Chicago and took acting lessons.

Lucas Neff began his acting career after Lucas was mistakenly assigned to performing arts departments at UIC. She rose to fame after playing the role of Jimmy Chance in Raising Hope alongside Martha Plimpton, Garret Dillahunt, and Shannon Woodward.

Lucas Neff's net worth is $4 million at present. He has garnered a good amount of net worth from his acting career. He stands at the height of 5 feet 10 inches.

Lucas Neff is a married man. He is married to his longtime girlfriend Caitlin Stasey since 2016. The couple first met two years before of their marriage. The couple invited the gossip of their marriage on January 17, 2016, when Lucas and Caitlin played a hide n seek game by the social network through dropping clues on their wedding.

On the same day, their fans also congratulated on their marriage. The wedding rumor eventually turned out to be true after Caitlin released their wedding picture by Instagram page in April 2016. Moreover, the speculation further added when Caitlin Stasey posted her baby bumps after eight months of their marriage on her Instagram.

Before that, Lucas Neff was romantically engaged with his ex-girlfriend-turned-fiancee, Kelly O’Sullivan. The couple first met Windy City and dated for three years. He had shared his excitement on getting involved  in a relationship through Hollywood.com and said:

Previously, Caitlin Stasey was in a relationship with Dean Geyer, Sam Clark, and Jonathan Wood as well. The couple is living a happily married life in Los Angeles, California.