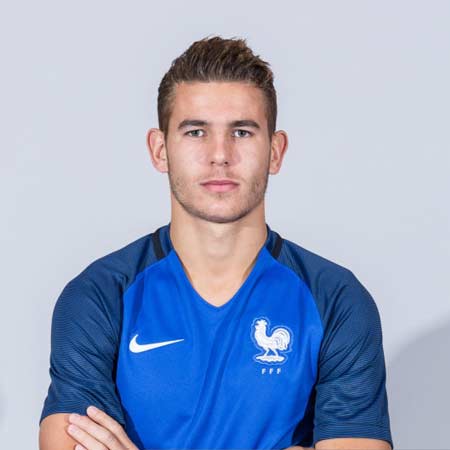 Versatile French professional player, Lucas Hernandez is playing as a left back or a central defender for Spanish club Atletico Madrid. Hernandez started his professional career from Madrid. He also represented his national team at the U16, U18, U19 and U20 levels. The defender is selected as a final 23 man squad for the 2018 FIFA World Cup.

Lucas Hernandez was born Lucas Francois Bernard Hernandez on 14th February 1996 in Marseille, France under the birth sign Aquarius. Hernandez is French as per nationality and as far as his ethnicity is concerned, he is of Spanish descent. He is the son of Jean-Francois (a footballer and a center back who also played for Atletico Madrid) and Py Laurence. He has a sibling Theo Hernandez.

Lucas Hernandez started his professional career in 2007, at the age of 11. Hernandez joined Atletico Madrid’s youth setup. He was called-up by manager Diego Simeone on 9th November 2013 for a La Liga match against Villarreal CF. He remained an unused substitute in the 1-1 draw match.

On 26th April 2014, Hernandez made his senior debut in 0-1 away loss against Real Sociedad B. The same year, he signed a contract with the club running until 2018. On 3rd December 2014, he made his first-team debut in a 3-0 win over CE L’Hospitalet in Copa del Ray.

Hernandez extended his contract on 10th August 2015 and was also promoted to the main squad. Till 2017-18 season, he has appeared in 87 matches.

On 6th March 2012, Lucas Hernandez earned his first cap for France in 1-1 friendly draw match against Italy. Hernandez also represented his national team at U16, U18, U19 and U20 levels.

The French defender was called up to the senior team in March 2018 by Didier Deschamps (manager) for a friendly match with Russia and Colombia. In May 2018, he was selected in the final 23 man-squad for the 2018 FIFA World Cup.

Lucas Hernandez has an estimated net worth of $1 million, but, the exact is not public. Hernandez makes a salary of €50k ($58649.25). His current market value is €27 million (31.67 million). He also earns a good amount from the endorsement deal with Nike.

The central defender, Leon Hernandez, likes to keep his personal life as private as possible. As per some online sources, he is still unmarried and is single in the present days.

Previously, he dated Amelia de La Ossa Lorente. While dating her, Hernandez was arrested in accusation of assaulting his girlfriend. Whereas, he claimed that his girlfriend fell accidentally after the heated argument.

As per El Pais, he returned home drunk and got involved in an argument with his then-girlfriend. Later, his ex-was taken to the hospital and treated for minor injuries.

Here is the video which shows Lucas Hernandez's skills: