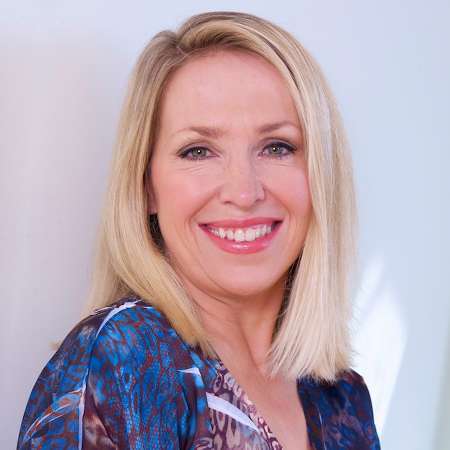 Lowri Turner is a British TV presenter, journalist, nutritional therapist, and hypnotherapist. She started her career as a fashion journalist for The Observer and became Fashion Editor at the London Evening Standard. She debuted on television from GMTV in 1993 and was a contributor to Doctor Who: Thirty in the TARDIS, a documentary celebration of the 30th anniversary of Doctor Who in 1993, in which she discussed the Edwardian feel to the Doctor's costumes and her fondness for Jon Pertwee's portrayal of the character.

Lowri Turner was born as Lowri Gwyneth Turner in the year 1964 December 31 in London, England. She is a British television presenter and journalist. Besides, she is also well known in the world as the nutritional therapist and hypnotherapist. She has received a Diploma in Nutritional Therapy from Institute for Optimum Nutrition.

She has specialized in hormone balance and weight loss. She runs three clinics and is registered with BANT (British Association of Applied Nutrition and Nutritional Therapy), GHSC (General Hypnotherapy Standards Council) and the CNHC (Complementary and Natural Healthcare Council). Being a journalist, Turner never loses the chance to write and broadcast widely on health. She writes for Grazia and Mother and Baby Magazines.

Lowri Turner was born to a Welsh Parents Mervyn and Shirley in 1964 at The GreyCoat Hospital, Westminster, London. She was one of the triplets from her parents. One of her triplet sisters has a learning disability. Lowri Turner had attended Camden School for Girls.

In the same year, she contributed in a documentary celebration of 30th anniversary of Doctor Who entitled “Doctor Who: Thirty Years in the Tardis.” Lowri had appeared as a celebrity panelist on BBC’s quiz show Going, Going, Gone and Channel 4’s Whose Line is it Anyway?

She has also presented a number of shows like Looking Good, Shopping City, Housecall, Would Like to Meet and DIY SOS. She has been the regular panelist on Channel Five show The Wright Stuff since 2002.

Lowri Turner has also worked as the author for the Welsh newspaper Western Mail. In 2006, she was criticized for her column in the newspaper entitled “However much I love my gay friends, I don’t want them running the country” in the Welsh Assembly for her homophobic comments.

In 2007, she was criticized for an article she wrote in a newspaper called Daily Mail as a racist. She claimed that she wrote regarding her newborn daughter who is mixed with race and no other intentions.

Lowri Turner's Net Worth And Salary

Lowri Turner's net worth is expected to be around $2.5 million at present. She earns a decent amount of salary from her career.

Talking more on Lowri Turner, she has been married twice. Her first husband was Paul Connew in the year 2001. She has two children from her first husband named Merlin and Griffin savers. Lowri and Paul got divorced while Lowri was a few weeks pregnant with her second child.

Then Lowri married Nicol Batra in the year 2005. Nicol Batra is an Asian man who is seven years younger than Lowri. They have a daughter named Ariel Ultra from the marriage. Later, feeling embarrassed and hurt for marrying someone who is 7 years younger, she split with Nicol as well after 18 months of marriage. She loves her children so much.

Lowri Turner has traveled different places regarding her work. She is a kind-hearted one and also participates in charity work. She has donated some of her earning and clothes to help in the campaign of helping the African Children.

Being a nutritionist and hypnotherapist, she believes in the intake of nutrient-rich meals that corrects hormone imbalance can make people feel healthier. She is very concerned about her health and weight.

She stands the height of 5 feet tall and her Body Measurement measures the size of 39-29-34 inches. Talking about her weight, she has a simple slimming strategy and wants to have a flat belly. She loves her short straight silky hair.

Lowri is an active user of social networks. Her fans can follow her on twitter, facebook, and others and get updated with her activities. Her biography and pictures can be found on different internet sites including the wiki.