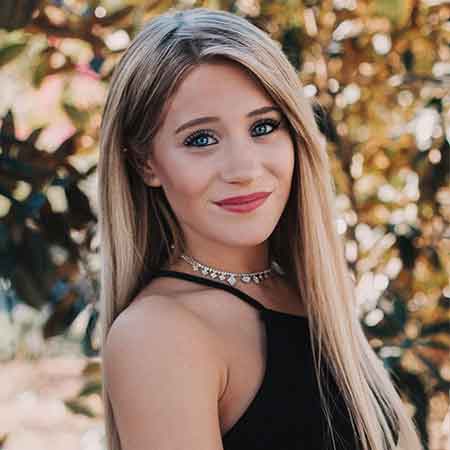 Elizabeth Wurst aka Lizzy Wurst is a social media personality who came to limelight after posting funny clips and short song covers on Vine. After Vine was shut down she focused more on Youtube and Instagram. As of 2019, she has 1.38 million+ YouTube subscribers and 1.7 million+ Instagram followers.

Lizzy Wurst was born on July 22, 1998, in the United States of America under the birth sign of Cancer. She is the daughter of Maria Wurst and Tom Wurst. She has a younger brother who frequently appears on her vines videos.

Regarding her education, she attended Delsea High School in New Jersey.

Talking about her career, firstly she introduced herself to videos of her boyfriend Lance Stewart. Then she made the first step on Twitter in June 2014 with a caption "This is my twitter guys". She gained many followers within a short time. She used to post funny stuff and short cover songs.

Then Wurst created her self-titled Youtube channel. On YouTube, she posted videos weekly which include comedy clips, pranks, lifestyle updates, and just plain stuff. One of her most popular videos was the hottest pepper challenge which she posted in 2016.

She also created a Vine account, which was subscribed by more than 130,000 followers. Unfortunately, the app shut down later.

Lizzy Wurst's Net Worth And Major Source Of Income

The young and sensational social media celebrity Lizzy Wurst's net worth is not disclosed. It is still under review. As per the reports, she makes up to $ 75000 from YouTube.

Similarly, an Instagrammer with followers above 100K can make thousands per post.  As of 2018 Wurst have 1.8 million followers so we can say that she makes more than thousands per month.

"I'm taking my time on my ride"

As per the Cavanagh, the price as per the followers is shown down below.

With such earning she is living a lavish life.

Also See, Jaclyn Hill Is One Of The Highest Paid YouTubers: How Much Is Her Net Worth? Details Of Her Houses And Cars

Lizzy Wurst's - Living Single After Break Up With Lance Stewart

Lizzy Wurst is yet to be married but has gone through a relationship in the past. Currently, she seems to be single. Previously she was dating her high school sweetheart Lance Stewart. She talked about how the couple first met in one of her videos named The Boyfriend Tag.

Her ex-boyfriend Stewart is also a big Youtuber with millions of followers. He encouraged Wurst to start her own channel in the year 2016. The two lovebirds usually make vlogs together.

You know what’s better then being goofy alone? Being goofy with your best friend w/ @lance210

A few years ago she suffered from breast cancer and she has discussed her insecurities about her breast size and how it reduced within the years before going for plastic surgery.

There was a rumor that Lizzy's mother sent her out of a house when she allegedly refused to give her a shout out on her channel and for refusing to help her mother create publicity on her new channel. Lizzy boyfriend Lance Stewart first officiated it by post the video of Lizzy crying. After seeing the video most of Lizzy's fans were angry at her mother while some of them have claimed it to be a prank to gain more followers and viewers.

As a result, she left mother's house and moved to her boyfriend's house.

Check out her videos