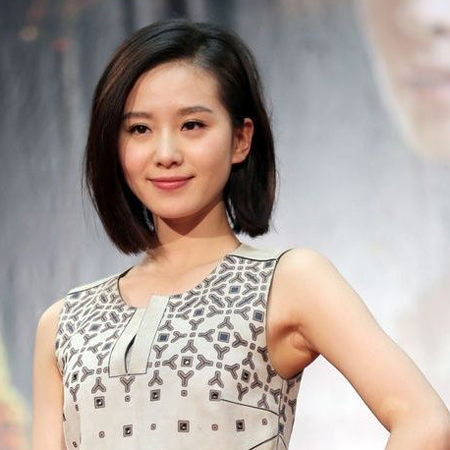 Liu Shishi is a Chinese actress who is popularly recognized for her major character in the Chinese TV show ‘Scarlet Heart.’ She was awarded Magnolia Most Popular Actress Award for her role in the show. She also featured in the television series ‘The Legend of the Condor Heroes’ and in the film ‘Sad Fairy Tale.’ As of 2017, she listed at the 19th position in the Forbes China Celebrity list.

Liu Shishi was born on March 10, 1987, in Beijing, China. She holds Chinese nationality whereas she belongs to Hui ethnical background.

Shishi was raised up in her hometown of Beijing and has completed her schooling from the same place. Following her graduation, she joined the Beijing Dance Academy and majored in ballet.

Liu Shishi made her professional acting debut appearing in the TV drama series, ‘The Moon and the Wind,’ in 2005. She also featured in ‘The Young Warriors’ in 2006 and ‘The Fairies of Liaozhai’ in 2007. After making her transition from a dancer to an actress successfully, Liu Shishi played the role of Mu Nianci in ‘The Legend of the Condor Heroes’ in 2008.

Shishi gained wide recognition after she featured in the popular Xianxia drama,‘Chinese Paladin 3’ in 2009. The following year, Liu Shishi appeared in the drama ‘A Weaver on the Horizon.’

In the year 2011, Shishi featured in two successful dramas. She starred in a period action drama ‘The Vigilantes In Makes’ alongside Wallace Huo.

Shishi later landed her role as the female protagonist, Ruoxi, in the time travel series, ‘Scarlet Heart.’ The drama grabbed acclaimed success in China and swiftly received popularity throughout East Asia too.

Besides, Liu Shishi appeared in several other movies, ‘A Moment of Love’ and ‘Sad Fairy’ and few others. Her next major breakthrough came in 2012 when she starred in ‘Xuan-Yuan Sword: Scar of Sky.’ The fantasy-action drama received 2 billion views online and topped TV rating. Southern Metropolis Daily also selected her as one of the new Four Dan Actresses alongside Ni Ni and Yang Mi.

Shishi featured alongside Jet Li in action comedy ‘Badges of Fury,’ in 2013. She gained global fame  after her appearance with Taiwanese actor, Chang Chen, in wuxia film ‘Brotherhood of Blades.’ She later made a came back to the small screen, with an appearance in the historical drama, ‘Sound of the Desert.’ The series domestically received a high rating and received positive reviews from critics and fans.

The Scarlet Heart actress, Liu Shishi, is a married woman. She registered her marriage with her boyfriend, Taiwanese singer, and actor, Nicholas Wu, on January 20, 2015. But, the couple organized their traditional wedding tea ceremony in Bali, Indonesia, on March 20, 2016.

Their wedding was lavish and cost a reported Hong Kong $25 million ($4.3 million of the US), it was attended by 250 guests at Bali's Ayana Resort and Spa. They began dating after filming the hugely popular ‘Scarlet Heart’, in 2011.

Liu Shishi and her husband, Nicholas, finally married via registration after more than four years of dating. The couple is living a happy life ever since.

Liu Shishi's Net Worth And Major Source Of Income

Magnolia Most Popular Actress Award winner, Liu Shishi, has established herself as one of the successful Chinese actresses. She has earned a good amount of net worth which is believed to be more than $12.66 million, as per some online sources, in 2018. Whereas, her husband, Nicky’s net worth is $60 million, according to Celebrity Net Worth.

It was reported that Nicky gifted Shishi a stunning wedding gift, transferring 60 percent of his entertainment company to Liu which worth about $166 million.