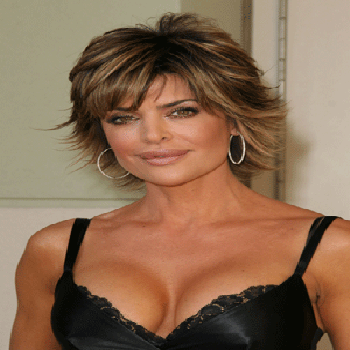 A very successful actress and model on her younger days, Lisa Rinna is recently involved in the show business as a host and a reality star. Wife to actor Harry Hamlin, she is best known for her roles on Days of our Lives as Billie Reed, on Melrose Place as Taylor McBride and as the host of Soap Talk.

Lisa Deanna Rinna was born on July 11, 1963, in Medford, Oregon to parents Lois and Frank Rinna. She is of American nationality and belongs to mixed ethnicity(Italian, Portuguese, and English).

I wish my Dad was still with us so he could see my Mom tonight on #RHOBH I am so proud of my Mom and I know Dad is watching from heaven and is so proud of you Mama! I love you!

She grew up along with her sister Nancy Rinna in Melford, Oregon.

Her acting career started when she was 22, i.e. in 1985 when she appeared in the video Naughty Naughty by John Parr, as the pa s senger in his car. Her next appearances included the role of Jason Bateman's character's girlfriend in many episodes of The Hogan Family in 1990.

She then starred as Billie Reed on NBC's Days of our Lives since 1992. This was her major breakthrough role that earned her national recognition and critical acclaim. Rinna departed from the show and portrayed the role of Taylor McBride on Aaron Spelling's Melrose Place from 1996. Rinna's Lifetime movie Another Woman's Husband grossed one of the highest ratings for a Lifetime movie.

Lisa's other acting credits include the teen crime drama Veronica Mars and the Lifetime movie Sex, Lies and Obsession alongside husband Harry Hamlin. Her first on-screen appearance alongside her husband was a guest role on an episode of Movie Stars for the WB.

She has also appeared as Francesca in Hannah Montana and her first role in a feature film was alongside stars like Charlie Sheen and Jon Lovitz on Good Advice. She also appeared in an episode of HBO's Entourage and on February 2009, in the Broadway Production of Chicago as Roxie Hart alongside her husband.

Nickelodeon's Big Time Rush also starred her in the role of Brooke Diamond in 2011 and she also expressed her desire to return back into her role of Taylor McBride on CW's revival of Melrose Place. On the end of 2011 however, she reprised the role of Billie Reed on Days of our Lives and her first scenes aired on March 9, 2012. By August, she left the soap to develop a talk show.

As a model, her career started at the age of 35 as a pregnant lady, whereby she appeared in as a cover model for the September issue of Playboy magazine in 1998.

She was the cover model for the magazine again in May 2009. She modeled an adult incontinence brief, to benefit the charity Dress for Success under a tight-fitting gown on 2012. Still a fan of fashionable clothing she now owns a Belle Gray clothing boutique in Sherman Oaks, California.

This hot, gorgeous beauty has had an equally exciting career as a host and a reality television star. She co-hosted Soap Talk in 2002, which aired on SOAPnet and earned her a Daytime Emmy Award nomination. The show was canceled after four seasons due to low ratings but her career as a host didn't end there.

Lisa replaced Joan Rivers to host the TV Guide Network's red carpet coverage in August 2007. She has also hosted the TV makeover program Merge on Lifetime and was the guest host for Live with Regis and Kelly.

Lisa Rinna's career as a reality television star starting with her participation in the second season of Dancing with the Stars with partner Louis Van Amstel. Despite being loved by the judges and scored comparatively well, she was eliminated in the seventh round, owing to audience voting. She also appeared as a guest judge on the fourth episode of RuPaul's Drag Race.

The breakthrough reality show was their family life reality TV series named Harry Loves Lisa. The announcement of the deal was done by TV Guide on 2008 and the show premiered on TV Land on October 6, 2010. This proves that she does not hesitate to showcase her family secrets to the world.

Rinna has also participated in the Season 4 of Celebrity Apprentice but was eliminated in the 2nd task. She, however, returned in the show's sixth season as one of the All-Stars contestants and was eliminated then as well. She has also appeared in the May 13, 2013 episode of Late Night with Jimmy Fallon reminiscing about her younger days.

Over the many years, Lisa Rinna has been on the show business, she has had a number of plastic surgery procedures which she doesn't hesitate to acknowledge unlike other celebrities do. Being constantly on screen, it is inevitable for celebrities to have the need to look better as they age and this is exactly the case with Lisa. At the age of 51, she still manages to have the youthful charm in her face, all thanks to plastic surgery and proper maintenance of her body.

Lisa Rinna has a net worth estimated to be of $8 million.

She married actor husband Harry Hamlin in 1997 and together they have appeared in numerous television and film productions. Their daughters, Deliah Belle, and Amelia Gray were born on June 10, 1998, and June 13, 2001, respectively.

When we were #fbf

No news about any kind of marital problems seems to surface about the couple anywhere and they seem to be doing well in their lives. Lisa, though having to care for her children along with handling her career still remains as charming as ever and continues to grace the TV with her occasional appearances on screen.

Lisa Rinna falls among the list of the very few celebrities who admit having undergone plastic surgery and regret some part of it.

The mother of two has had Botox injections to spice up her facial appearance and make her cheeks look better. She has also had silicone injected into her lips to make it look fuller. Juvederm injections on her forehead and neck have had visible effects on her appearance. The before and after pictures of Lisa show a considerable change in her face; fuller lips, glossy cheeks, almost unnatural looking shine, and a harder, younger appearance.

But all did not end up well for Lisa as she had some of the procedures undone owing to feeling uncomfortable. She admits the use of Juvederm a mistake but still remains fond of Botox. Lisa said that she had had most of the silicone in her lips removed as it became hard.