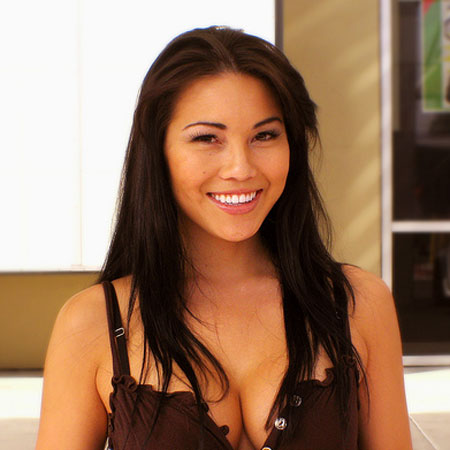 Elizabeth Lee Kim-Lohmann professionally known as Lisa Kim was born on 26th April 1985 in North Dakota. She is an international model. She can be seen in covers of different magazines like Maxim, Axe, Spike TV, Super Street, etc.

Lisa Kim was born in North Dakota but raised in Sacramento, California. She was born there because her father was stationed there. She also lived in Korea for a short period of time when she was small.

Her father and mother met when her father was stationed in Pusan Korea. She has an older sister. While she was growing up she had many mixed kids like Filipino, Korean etc. Her middle name is Kim because it’s her mother’s maiden name.

Lee Kim always wanted to be a model from her early age. She started her career at a modeling agency in Sacramento, but she did not get any jobs.She appeared on a reality show on E! entertainment. There she met many people who helped her to get started if she wanted to move to Los Angeles.

Her sister at that time lived in LA so it became easy for her to move Los Angeles. She then moved to LA where she began with agencies and at first, she struggled a lot to get the job, because she was half Asian.

Besides her modeling, Lisa Kim has also started to expand and also get involved with other aspects of the industry with her advertising and marketing company named iUNITE Media group. The group has various elements like event team City of Angels and auto online magazine Jtuned.com.

Lisa even told that she would mostly prefer to date Asians. She even revealed that she had affairs in the past and has only dated Korean, Vietnamese and Filipino so far.

Though she has been living in the US since childhood, she can also cook Korean foods such as Dduk guk, kimchi bokumbap, galbi etc.

Lisa has a tattoo on her right shoulder, she got it when she was 18 years old. It is her name Lisa Kim written in the Korean language. Lisa also says that she experienced racism while growing up.

People used to say her Chinese while she hangs out with Caucasians and Asians would call her that she is White. Japan is Kim’s favorite country. She loves the fashion and also the culture of the country.

Lisa said that she is always online as her most of her work is online keeping her website up to date. She is also active in different social sites Facebook, Twitter, MySpace etc.