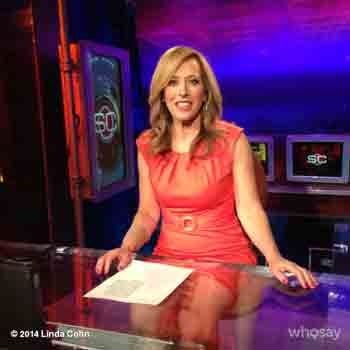 An American Sportscaster Linda Cohn is an anchor working for ESPN’s SportsCentre. She is a sports anchor since the year 1992. She has worked for WALK-AM/FM, WGBB-AM, ESPN, etc. Besides, she is also an author who has released her memoir Cohn-Head: A No-Holds-Barred Account of Breaking Into the Boys' Club.

Linda Cohn was born on 10th November 1959 in Long Island, New York, United States, under the birth sign Scorpio. She is American by nationality and belongs to white ethnicity.

Cohn went to the Newfield High School based in Selden on Long Island. During her high school days, she has demonstrated her ice hockey talent making her way in high school’s boy's team.

She has been a fan of the New York Giants, New York Mets, New York Knicks, and New York Rangers. The team is the most popular ones in New York.

After graduating high school, she attended SUNY at Oswego majoring in bachelor’s degree in arts and communications in the year 1981. While at the SUNY, she was the goalie for the women’s ice hockey team and was inducted into the Oswego State athletics hall of fame in 2006.

Having been passionate and curious about sports as she is also a talented player, she has been interested in the sports field and went on to pursue her career as a sportscaster.

In 1987, Cohn became the first full-time U.S female sportscaster on the national radio network. She anchored the WABC Talk Radio Show from 1987-1988. In 1988, she joined the SportsChannel America Network as a reporter. Later on, she moved to KIRO-TV based in Seattle as a sports anchor.

After some years at KIRO-TV, she was hired by ESPN to work on its SportsCenter in 1992. Ever since she has been the familiar face to the viewers of the SportsCentre.

In 2005, Cohn extended her contract with ESPN and to her duties; WNBA telecast through the program play-by-play has been added. She has been hosting the SportsCenter 1-3 pm eastern FROM Monday TO Friday and has also been hosting the podcast “Listen Closely to Linda Cohn.”

Cohn has been a prognosticator in the 1997 NCAA basketball tournament. She has also been featured in many of the SportsCenter show’s comical These is SportsCenter commercials. Besides being a talented and inspiring journalist, she is also an author.

Cohn has written her own memoir titled Cohen-Head: A No-Holds-Barred Account of Breaking Into the Boy’s Club. In the book, she has mentioned her passion for sports and her work experiences, and her story of being one of the recognized sportscasters in the male-dominated sportscasting world.

Talking about Linda, Linda Cohn has a very graceful appearance with a pleasing personality. She has a very beautiful height with a maintained body figure. She has amazing curves which she shows flaunting in a fitting shirt and A-line skirt accompanied by a pair of hot, toned, and sexy legs.

Linda is a demand television personality. A rumor had been busted a few times ago that she had done plastic surgery to enhance her looks. The rumor is not officially accepted yet.

As of 2019, Deborah is reported to have an estimated salary of $3 million per year, as per celebrity net worth. The significant source of her income is her journalism career as she has not disclosed any information about her other income generating business.

Moreover, Linda has an estimated net worth of $10 million, as per the richest net worth.

Linda Cohn has a lot of admirers and has been loved by many of the viewers. For such a recognized lady, a man, her husband, Stew Kaufman, is all and the winner of her love and heart. They are the college sweethearts.

Their love affair had been long before they exchanged their marital vows. However, the couple is divorced now due to their personal issues. Linda has two children from him whom she loves very much. She lives with her two children.

She has been a good mother to them taking good care of her children and fulfilling all the responsibilities of a mother.  currently, Linda was in a brief relationship with Matt Voity, who is a hockey mentor. She said that Matt has been a major part of her life for a long and she would not like to make it an open display.

The couple, however, did not last long and broke up in early 2019.