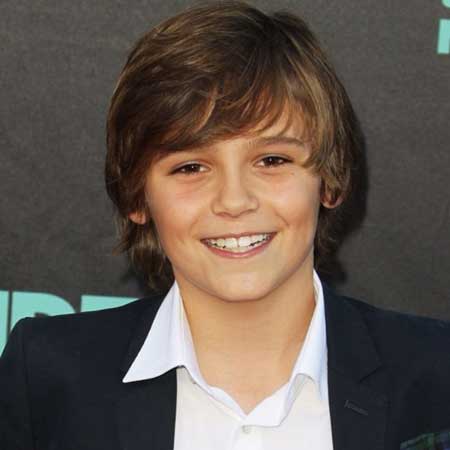 Lincoln Melcher is a child actor in the Hollywood film industry who is mostly known for his role as Philip Parker in the movie “Alexander and the Terrible, Horrible, No Good, Very Bad Day.” Melcher appeared as Griff Jones on Bunk’d and would be starring in the Ouija and Ouija 2. Recently he appeared in the movie Mr. Church which helped him to gain a wide popularity.

Lincoln Melcher was born on 12th December 2003 A.D. He has been quite a busy guy as he is now overwhelmed with acting offers from all over. He is an American by nationality and belongs to White-American ethnicity.

Lincoln from his early age was interested in acting and has got an amazing talent. He has got a sister named Louisa. He is taking extra Spanish classes and loves to pull pranks on his friends.

Melcher started his career with a very small role in a famous series named“Scandal” aired on ABC. Although he played a supporting role in the series his fine performance helped him gain a lot of visibility.

Melcher work in the movie supported him carve his niche since then there has been no looking back for this famous child artist.  He found his next big break with the role of a pessimist in the family entertainer in “Alexander and the Terrible” “Horrible”, “No Good”, “Very Bad Day.”

Lincoln didn’t just appeared on big-screen roles but also tried himself to make him busy in the world of television.  His career reached the top of the world with roles in major TV series like “Agent Carter” and “Nicky, Ricky, Dicky and Dawn” produced by Nickelodeon.

Not only in comedy and political drama series, but Lincoln has also appeared in a horror movie called “Ouija: Origin of Evil.” Being just 13-years-old- he bagged all the acting credits. This ever-gleeful child does a pretty decent job at antagonist roles.

In 2018, he took first place in the Toyota Tour Championship at Tustin Ranch and in the 14-15 division of the 68th Annual L.A. City Junior Golf Championship. His goal is to play on the PGA Tour one day.

Lincoln Melcher's Net Worth And Salary

The child artist, Lincoln Melcher is famous through his role and acting. His net worth is reported to be around $1 million. He has earned a decent amount of salary from his career.

Lincoln is a famous child actor with a height of 5 feet 3 inch. He has got Brown eye color with Brown hair.

The talented actor loves making people laugh through his comedy series. He loves making friends on a set and making light of the situation in his own silly ways. He is a special human and even more, a special superstar. He has got a charming look and a great sense of humor. As he is single he has no affair with anyone.

Lincoln actively uses Instagram to connect his fans at more personal level. He shares photos and videos of his life on and off film sets.  He has also tried his hand at ‘Musical.ly’ and is slowly gaining attention for his videos uploaded on the famous site. There are no rumors of him dating anyone.