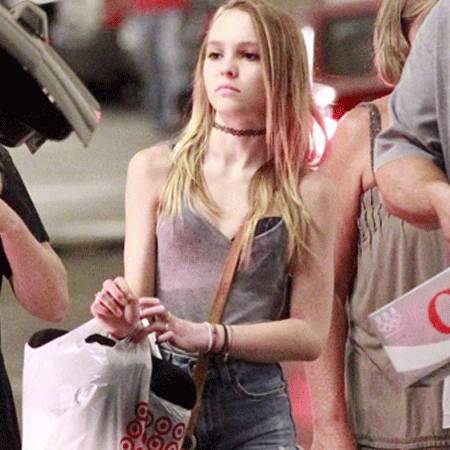 Lily-Rose Melody Depp is the daughter of world famous actor Johhny Depp and and actress Vanessa Paradis, as well as an aspiring model and actress. Born on 27th May, 1999, in Paris, this teenage beauty is sure to take up Hollywood in a few more years to come. As of now, she is a model with an air of enigma surrounding her. This half French half American beauty has acquired both of her parent’s looks and thus is stunningly beautiful to look at. She doesn’t have a wiki page yet but Johnny Depp fans tend to search a lot about his enigmatic daughter.

As a child, Lily suffered from an illness which nearly killed her. She obtained an E.Coli infection at the age of seven which shut down her kidneys. Her parents stayed in the hospital until her recovery and her condition was covered by the media all around the world. Lily’s parents also wrote and sang a lullaby named La Balade De Lily Rose in French for her. Her brother Jack Depp is three years younger than her.

As far as her career is concerned, Lily is set to appear with her superstar father Johhny Depp in a movie titled "Yoga Hosers" very soon. The movie is about a bunch of teen yoga fanatics. She will be playing the lead role for the movie. She will also appear in a comedy-horror entitled "Tusk" in the role of a shop assistant.

Apart from debuting in acting at the age of 15, Lily is well into modeling as well. The daughter of a famous model parent, she is considered to be fashion’s new face. She appeared in the Chanel Paris-Salzburg show which garnered her quite a lot of media affection. She has also walked on the runway for Chanel. Lily is also said to hang out with other fashionistas like Kendall Jenner and Cara Delevingne.

Lily is extremely active on social networking sites like Twitter and Instagram as well. The goofy pictures she puts up on instagram are liked and followed by millions around the world. Her favorite band is One Direction and she has been seen posting pictures of herself with the band and also with Harry Styles. It is believed that her father once invited the band at their home to perform for her when she was 13. Apart from that her other interests include Harry Potter and dogs. She is also friends with Willow Smith. She is also close to her step mother, the gorgeous Amber Heard who also gives her fashion advice.

Lily Depp isn’t just famous for being the daughter of famous parents but has also created an impact on people owing to her attitude and perfect modeling skills. There are no news about her having any affair and she does not have a boyfriend yet. She sure is extremely lucky to have a superstar father who has engraved her name across his chest and is sure to rise into the heights of fame when the time is right for her to do so.