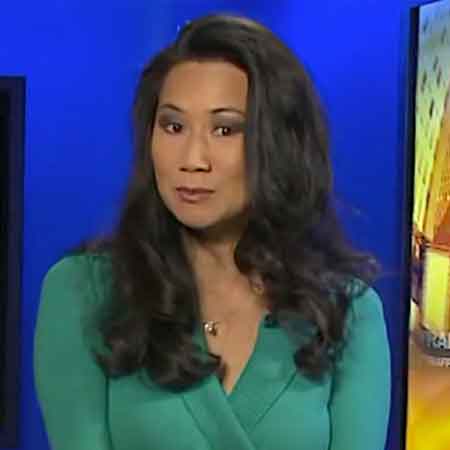 Born and raised in Los Angeles, Liberte Chan serves as a Meteorologist and news Reporter at KTLA. In 2010, she joined the channel as a freelance writer. Similarly, she held numerous prestigious positions working for various networks such as KCOY-TV/KKFX-TV and KMIR 6 News. So far, she runs her own blog LifeOfLiberté.com.

Liberte Chan was born in  Los Angeles, the United States. She is the daughter born to a Caucasian father and a Chinese mother. She grew up in a cross-cultural family along with her two older brothers. Her actual date of birth, however, is yet to be disclosed. She is a devotee of Christianity religion.

In 1998, Chan did her schooling from the Marlborough School for Girls. She then enrolled at the University of Ma s sachusetts and obtained a Bachelor Degree in Journalism. She also earned her additional certification in broadcast journalism from University of California, Los Angeles.

To become a health reporter, she went on to enroll at the USC’s Keck School of Medicine and obtained a masters degree in Public Health.

Expanding her academic career, Chan attended the Mississippi State University and received a certificate in Meteorology in August 2015.

Liberte Chan started her media career in the year 2003 by joining KTLA in Los Angeles as a writer. She, later on, worked as a meteorologist too. In 2005, she joined KCOY-TV/KKFX-TV and also worked as a general a s sistant reporter from 2006 to 2008 at Santa Barbara County on Central Coast.

Chan later landed her job as a reporter and morning anchor from 2008 to 2010 at KMIR 6 News. She is, as of 2018, worked for KTLA channel where she held many high positions like a weathercaster, news reporter, and a meteorologist.

Besides, she is a life blogger too. She runs her own blog LifeOfLiberté.com where she talks fashion, shares beauty tips, healthy meal, and snack options, and decoration ideas.

Liberte Chan's Net Worth And Salary

Through her illustrious career, Liberte Chan has earned a decent amount of money. According to some authorized sources, her earnings through her journalism career have boosted her net worth to $2 million.

It is also reported that Chan's annual salary is around $500K.

Liberte Chan was married to her longtime boyfriend, an American actor, Brian Chase for a long time. The two exchanged the vows in 2012 at the Greystone Mansion’s garden. Despite the fact that the pair looked happy together, she and her husband attracted a media attention when the rumors of their divorce surfaced just a few years after their marriage.

It is yet to be confirmed that their divorce was finalized or still in a process. It has also been reported Chan is currently dating Brett Hoebel, a yoga instructor and the co-founder of Sweat with Soul. He also authored a book The 20 Minute Body.

Chan often snaps a picture of her beau on her Instagram account. She owns her yellow lab, Shanti. She currently resides in Los Angeles with her Shanti.