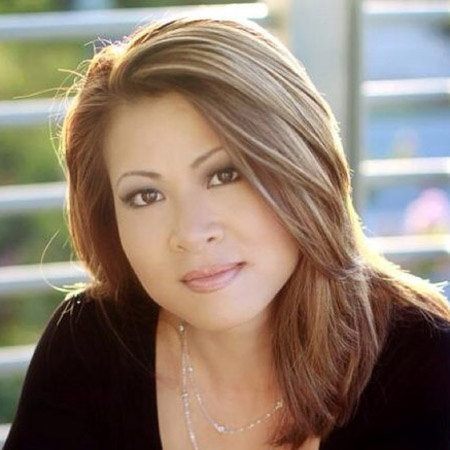 Leyna Nguyen is a television anchor known particularly for her work in the KCBS-TV as well as the KCAL-TV. Leyna Nguyen is a beautiful newscaster who rose to fame for her anchoring skills. She is a Vietnamese-born television personality. The three-time Emmy Award-winning journalist is one of the most popular newswomen in the KCAL-TV. She has also been featured in numerous films and TV series including Boston Legal, Two and a Half Men and Teenage Mutant Ninja Turtles.

Leyna Nguyen was born on the 13th of December 1969 in Dong Ga, southern Vietnam.  She was brought up in her hometown but later moved to America for her education where she started her acting career. After completing her high school level, she enrolled at the Webster University for her further education.

While in St. Louis, Missouri, she was the Morning Drive personality for jazz radio station WEBU and was a substitute teacher for grades K through 6. She also won Miss Asia in 1996 and she was named YWCA Woman of the Year in 2000.

Leyna Nguyen’s career started off as a Morning Drive personality for the WEBU- a jazz radio station. She also worked as a substitute teacher for grades K to 6.

Leyna Nguyen joined in with the KCBS-TV and KCAL-Tv in the year 1997. She has been holding the position of an esteemed anchorwoman, newscaster and anchor in the channel ever since and her work there have been appreciated widely.

She has been a highly requested speaker and has appeared in over 30 television shows and movies which include Boston Legal, NCIS, Teenage Mutant Ninja and much more. Leyna is also a former Miss Asia and has been named the former YWCA Woman of the Year.

Besides, Leyna is also active in charity work where she has a non-profit organization which helped unprivileged children.

Her height is 5 feet and 4 inches and she has a pretty well-managed weight. Her personality and appearance have been extremely liked by her fans. She is a style icon and her sense of dressing and style has been followed extensively by her fans.

Leyna Nguyen is a married woman. She married Michael Mariano on April 11, 2005. There is very less information regarding where the lovebirds met for the first time and how their relationship grew stronger before they tied the knot.

The couple is happy as husband-and-wife and there is no news of dispute between the husband-and-wife in their over a decade long married life. They are also blessed with two children, however, she hasn't revealed their identity.

Apart from this, Nguyen hasn't revealed her past relationship and affairs despite being a well-known media personality for so long. Besides, Leyna Nguyen's hobbies are cooking, listening and singing music and martial arts.