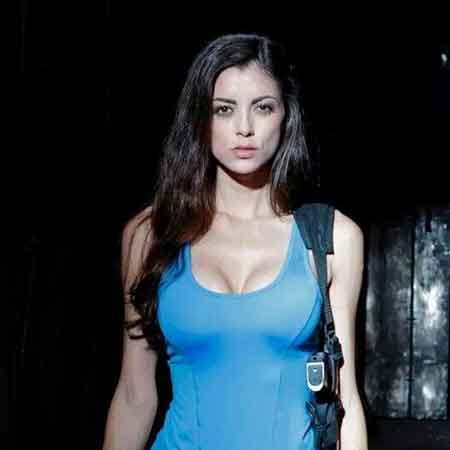 American multi-talented personality, LeeAnna Vamp aka Vampstress is also a model. Vamp is best known for her bold looks. She created and produced web series, Best Friends Forever, Star Wars Girls, and Fright Night Show. She is married to actor Cameron Lee Vamp. The couple married in a horror theme ceremony attended by their families and friends.

LeeAnn Vamp was born on 26th January 1981 in California, the United States. Vamp is Aquarius which defines her personality to be free-spirited and eccentric. Her parent's name has not been disclosed yet, but, she mentioned Elvira aka Ca s sandra Peterson as her mom.

From the very early age, she was interested in horror, fantasy, and sci-fi genres. Vamp earned a B.A. degree in communication from Cal State University in 2010.

LeeAnna Vamp's Career And Net Worth

LeeAnn Vamp is an actress and model by profession. Vamp prefers to address herself as ''Your Best Nightmare'' and ''Ghoul Of Your Dreams'' is a producer of the projects like Best Friends Forever, Star Wars Girls, and Fright Night Show. In addition, she is a high fashion model with her bold and unique look.

Vamp started her YouTube career in 2010 by creating a YouTube channel, Vamp, where she uploads her projects and interview. On July 29, 2010, she uploaded a video, San Diego Comic-Con 2010 " VAMPTRESS " - LeeAnna VAMP & Evil Cheerleaders which earn over 8k views. As of 2018, her channel has over 25k subscribers.

She earned a lot of money from her acting and cosplay.  As per some online sources, Vamp has an estimated net worth of $200k, however, the exact amount is not public. She is earning an impressive amount from her career.

The couple wed with a completely different theme. It was somehow similar to what we see in the horror movies. Check out the video of their marriage ceremony.

She is called ''Halloween Goddess'' by her fans as her favorite Holiday is Halloween. She told.

''I love evil stuff and all things Halloween. We all know who we are out there growing up as kids and loving the magic of the holidays. Christmas is awesome.... but for us, Halloween just kicks so much more a s s.''

Vamp introduce herself as,

''LeeAnna Vamp... is my real name and I am also known as the Vampires. A " VAMP " is a seductress, a woman that knows her power, is alluring and enchanting. It is short for Vampire, but I think it's a style of my own that's edgy, sexy, dark and glamorous... I AM VAMP.''

She is a nerd at heart and loves to dress in black. LeeAnna loves everything Fantasy, Sci-Fi, and Horror and thoroughly enjoys meeting her fans at comic and horror conventions.