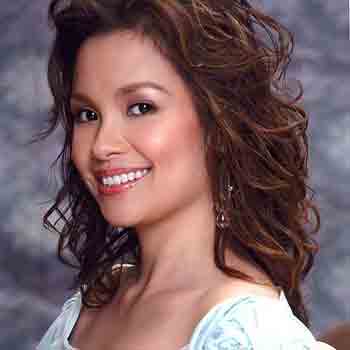 Maria Lea Carmen Imutan Salonga AKA Lea Salonga, a Filipina singer/actress, is best known for her roles in musical theaters, providing the singing voice of two Disney Princesses in the two fairy tales; Aladdin as Jasmine and Mulan as Fa Mulan. She is known as a Disney Legend 2010 for her work with the Walt Disney Company.

She went to O.B Montessori Centre in Green Hills, San Juan, Metro Manila where she completed her high school in 1988 and attended the University of the Philippines College of Music’s extension program which is aimed at providing training in music and stage movement.

While being a fresher at Ateneo de Manila, she auditioned for the Miss Saigon, and later, after moving to New York for her job, she took two courses at Fordham University and Lincoln Centre Campus.

Lea is the first Filipino artist who has been signed to an international record label and to receive a major album release and distribution deal in the United States. She has been one of the best-selling Filipino artists of all time to have sold her albums over five million copies worldwide.

Lea made her professional debut when she was at the mere age of 7 playings in the musical The King and I by Repertory Philippines.

Later on, she began to appear in the lead roles of other musicals like Cat on a Hot Tin Roof, The Goodbye Girl, Paper Moon, and others. In 1985, Lea and her brother Gerard took part in the eighth Metro Manila Popular Music Festival. Besides, she also began to appear on television screens through GMA Network as a child actor and teen idol.

She used to run her own musical television show as well, titled Love, Lea. She has played in different movies like Ninja Kids, Captain Barbell, Like Father, Like Son, and many others.

In 1989, she was selected for the role of Kim in the musical Miss Saigon. It had been tough to find a performer like her in the British production, so we're looking for East Asian performers coming to Asia from Britain.

After the grand success of Miss Saigon, she returned to her home country where she also received the Presidential Award of Merit from President Corazon Aquino for her contribution to dignify the nation through the talent in her.

After completion of Miss Saigon, she was offered a role in the Broadway production titled Les Miserables as street waif Eponine. She has been the first Asian actress to do so. Afterward, she did the playback of Disney’s Aladdin to the song “A Whole New World,” where the song won an Oscar.

In the same year, she released her self-titled international debut album which went platinum in the Philippines and with the modest sale in the USA but selling over 3 million copies worldwide.

Her success stories continue afterward. She has recorded several of the songs and released several of the albums. With her talent, she has won several awards in the music industry and been in a dignified and very respectable position. Lea has a mighty sharp soprano voice ranging from D3 to C6.

She is praised for her control over her powerful vocals. Her role in Miss Saigon has been the best showcase of her voice from a full top to bottom. She is also known for singing simple love songs which is a common traditional Original Pilipino Music.

For her talent, she has been nominated to the Filipino Academy of Movie Arts and Sciences' Best Child Actress and has won the three Aliw Awards for Best Child Performer.

Lea has won prestigious awards like Olivier, Drama Desk, Tony, Theatre World, and Outer Critics awards for her performance in the lead role of Kim in the musical Miss Saigon.

Lea Salonga's Net Worth And Earnings

According to celebrity net worth, Lea Salonga's current net worth is estimated to be around $18 million. She earns a huge amount of money from her job.

Observing her earnings over the past years, she, definitely, is earning a high figure of salary and living a lavish lifestyle.

Salonga is a married woman. She is married to her husband Robert Charles Chien. The couple got married on 10th January 2004 after dating for a couple of years.

Her husband Chien is a Chinese-Japanese managing director of an entertainment software company based in LA, California.

Lea met him when she was doing the Flower Drum Song. Shortly after their first meeting, the couple started dating, and they turned their relationship into marriage in 2004.

The adorable lovebirds are also blessed with a beautiful daughter who was born in 2006. They named their first and only daughter Nicole Beverly after Lea’s late mother-in-law. Lea mentioned her daughter to be an avid video game enthusiast in her print articles.

The 48 years old singer Lea Salonga has been praised and appreciated for her fantastic talent of singing. Lea is also known as Lei, Tata, Pride of the Philippines, and Manang, which she uses as her chat name.

Keep visiting ArticleBio.com for the professional and personal lives of celebrities!