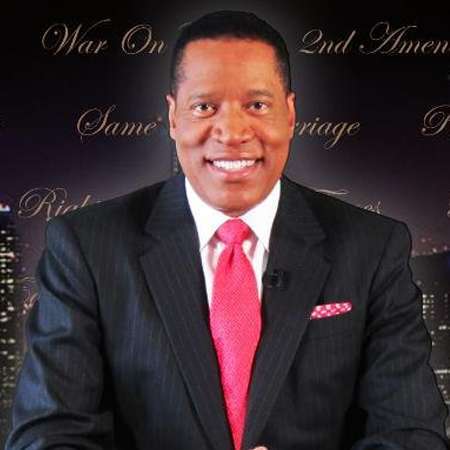 Larry was born on April 27, 1952 in Los Angeles, United states. He studied at Washington Preparatory High School and later on joined Crenshaw High School and graduated there. He went to Brown University in 1974 earned his B.A. in political science. In 1977 he earned his J.D. from University of Michigan Law School. After his graduation he joined Cleveland, Ohio, where he practiced litigation. He founded Laurence A. Elder and Associates, recruiting attorneys in 1980.

He host a topic-oriented television show on PBS affiliate WVIZ produced by Dennis Goulden. Elder’s show was nationally syndicated by the ABC Radio Networks and its news-talk network, ABC News & Talk in 2007 but later  Citadel Broadcasting took over most of ABC's radio operations in 2007, syndication of Elder's show was also discontinued in the favor of Mark Levin. In December 2008, Larry announced that it was his last month at KABC. In 2009 December he started a daily live podcast as well as a webcast. He started to charge his podcasts in late March 2011. Elder joined the lineup of CRN Digital Talk Radio Networks on June 1 2015. His program starts from noon 3 pm on CRN Channel 1. For the same year he replaced Ben Shapiro on the Morning Answer show, on local radio station KRLA.
Larry created a video in January 2016, where he talked about Is America Racist? His video got great success. More than 2 million people viewed it in YouTube and Facebook. He has written many article and books, his debut book was 10 things you can’t say in America. The book received a good response and it had a great success.

Elder was the second son of Randolph and Viola Conley Elder's three sons. His family used to live in the largely Latino Pico-Union district of Los Angeles.  His father got engaged in varieties of jobs for the sake of his family, he served as a cook in the Philippines during World War 2. His father even attained the night school to earn his GED. By his forties he had saved enough money to open their own café, which he successfully owned and it was operated over 30 years in Los Angeles. Most often he talks about his father in his shows he says, “A tougher life I have rarely come across. Yet he never hated, he was never bitter, he never condemned his circumstances, and he always said there are very few problems that cannot be solved through hard work."
Larry Elder engaged with ‎Alexandra Datig and married her. The couple has not given birth to any children.
There is no any news and rumor related to his previous affairs and his extra relationships. He is doing well his wife and the couple is happily living with each other. Larry created a self-financed film called Michael & Me in 2005. He also created a video, Title IX and Women in Sports: What's Wrong with This Picture and For Goodness Sake II in 1996. His salary is estimated to have net worth of $2 million.

Larry has huge fans following who follow him in social networking sites such as instagram, twitter, Facebook and many more. He is followed by more than 83000 fans in twitter and mare than 51000 people are connected to him via Facebook. He has shared numerous quotes with his beloved and fans in the social networking media, some of his quotes are: “You must remember to compare benefits versus costs. For the foreseeable future, the only affordable alternatives are coal, natural gas, oil or nuclear. Renewable sources - solar, wind, etc. - so favored by the left remain prohibitively expensive. A nation becomes weaker, not stronger, by artificially overspending on costly, inefficient alternatives to fossil fuels.”
“This battle for 'common-sense' gun control laws pits emotion and passion against logic and reason. All too often in such a contest, logic loses. So, expect more meaningless, if not harmful, 'gun control' legislation. Good news - if you're a crook.”