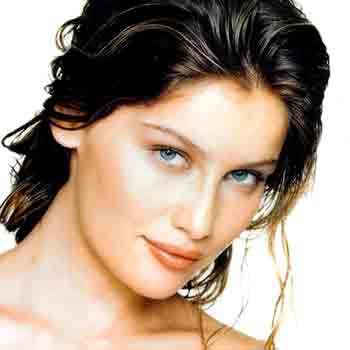 Laetitia Marie Laure Casta is a prominent French actress and supermodel. Casta has been noted for walking the ramp as a Victoria’s Secret Angel for 1998 to 2000 and also being a Guess? Girl in 1993. She has worked for various brands as a spokesperson and a model. Laetitia has posed for the cover of various magazines including Cosmopolitan, Vogue, Rolling Stone and has modeled for brands like Ralph Lauren, Givenchy, Roberto Cavalli and many more.

Laetitia Marie Laure Casta was born on 11th May 1978 in Pont-Audemer, Normandy, France of parents Dominique Casta and Line Blin. Casta has an older brother named Jean-Baptiste and a younger sister named Marie-Ange. Laetitia was raised in Normandy and also in Corsica.

Her nationality is French. Casta recalls her childhood as being fun. Her ethnicity is Corsican. Casta started her modeling career when she encountered photographer Fredric Cresseaux while she was on a family holiday at age 15.

Casta was unexpectedly registered by Jeeby and was thus elected Miss Lumii 93. Not long after that Casta became the brand amba s sador for L’Oreal Paris in 1998 and has been its amba s sador ever since. Then Casta was featured in GUESS? Jeans ad campaign.

Then again the next year, Casta got the privilege to walk their ramp and she continued doing so till 2000.  She was one of the main Victoria’s Secret Angels of the company till 2000. After that she started appearing in various other magazine Issues like Sports Illustrated Swimsuit Issues, Rolling Stone, the Pirelli Calendar in 1999 and 2000.

Casta was titled first in a national survey in France to decide who should be the new model for the bust of Marianne. But she became a controversy overnight when newspapers in both Britain and France reported that she located to London where taxes on high earners are lower, eventually he father supported Casta by saying that she moved to London for professional purpose and not due to the alleged rumors.

For her work in this film she was nominated for the Ceasar Award of the Best Supporting Actress. In the same year she opened the Louis Vuitton Fall-Winter 2010 fashion show in Paris. She also closed the Roberto Cavalli SS 2011 fashion show in Milan as well.

Casta has made various forays into the blockbuster titled Astrix & Obelix Take On Caesar. Then again Casta appeared in a dramatic film titled Lem Ames Fortes. In 2012 served as a jury member at the 69th Venice International Film Festival.

Laetitia Casta has been involved in many types of political movements. Casta once demonstrated in a White March of nonviolent protest for the instant release of a presidential candidate named Ingrid Betancourt who was kidnapped since 2002 by the FARC( Revolutionary Armed Forces of Colombia) Laetitia has an hourgla s s-shaped body, she stands tall at the height of 5 feet 6 inches and weighs a total of 54 kg.

Casta’s body measurement is a perfect 36-24-36 inches.  Casta has been successful in her arena and thus her net worth is $12 million.

Casta has appeared in several films like Gainsbourg, Face and Blue Bicycle and has also given many theatre performances. Casta has been honored Golden swan of the best actress and nominated a Cesar Award for her excellent acting skills. She has been titled #1 among Top 50 Most Beautiful Women by the website Askmen.com.

Casta was married to the director, photographer and producer Stephane Sednaoui with whom she has a daughter Sahteene. The couple later went under a divorce. Casta then began dating Italian actor Stefano Accorsi and had two children; a son named Orlando who was born on 21st September 2006 and a daughter named Athena born on 29th August 2009. \

May it be true news or fallacious information but there is a rumor that started on 21st October in Twitter that this French model is splitting up with her husband.