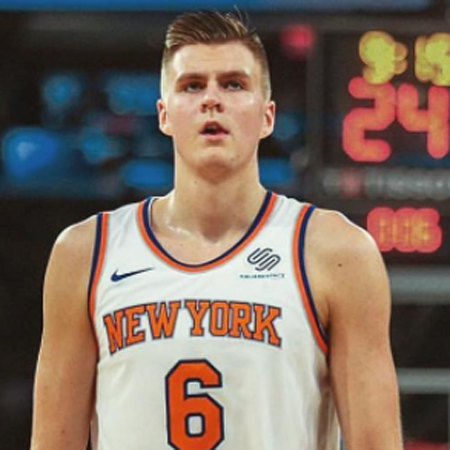 Kristaps Porzingis is a Latvian professional basketball player well-known as a player for the New York Knicks in the NBA (National Basketball Association).On 30 July 2015, Kristaps agreed and signed the rookie-scale contract with the Knicks.

Kristaps Porzingis was born on 2nd August 1995, in Liepaja, Latvia. He followed his parents' guidelines and began playing basketball at the age of six. He is Caucasian in ethnicity and holds Latvian nationality.

Porzingis was born to Talis, his father who played basketball semi-professionally before working as a bus driver; and his mother, Ingrida who was the former player of Lativa Women's national basketball team.

After Porzingis turned twelve, his elder brother, Janis, who played professional basketball in Europe, used to take him in offseason training sessions.

Porzingis also played in competitions with BK Liepajas Lauvas, most popular club located in the hometown of Liepaja, until he was fifteen. Later, a Latvian agent sent a video of him to teams in Italy and Spain.

In the year 2010, Baloncesto Sevilla, a club with a professional team competing in the Liga ACB in Spain invited Kristaps Porzingis for a try to recruit foreign skills to its junior teams.

Porzingis was 2.03 m in height and weighed 157 lbs during the time. He remembered the moment, and in an interview he shared:

A nutritionist for Sevilla, Avivar, confirmed that Porzingis was suffering from anemia. Anemia is caused by the lack of red blood cells. This caused Porzingis feel weariness, inability to exercise and shortness of breath. Nevertheless, Kristaps Porzingis overcame his sufferings and started progressing in his game.

In his first season playing in the junior squad, he worked very hard to communicate with the coaching staffs and his teammates too.

Porzingis played first time for the youth squad on 4th Jan 2012, against its counter team from Barcelona, with 12 points added and 10 rebounds. Alexandr Zhigulin forwarded the opposite team. Unfortunately, Sevilla lost the game by 56-75.

On 5th Jan, Keistaps made his personal best of 16 points on the Spars Sarajevo youth squad, assisting Sevilla to win against their opponents by a line of points.

On 29 September 2012, Kristaps, got the chance to make his appearance in the club's first game, but he was allowed to play for 60 seconds only. Sevilla faced a great loss to BC Murcia after Porzingis returned to the youth categories of the club based on Torneig de Basquet Junior Ciutat de L'Hospitalet.

Porzingis returned back to the game to compete against the senior squad. On 16 Jan 2013, Porzingis logged only for four minutes playing opposite Spartak Saint Petersburg in the EuroCup, with no points.

On 20 Feb 2013, Porzingis scored his first basket for the senior team, in the battle with Spartak. Porzingis said:

I was very nervous at the beginning: I wanted to do well and not pick up turnovers. At the same time, I got a confidence with players of my same age. That allowed me to play better and practice with more confidence.

Porzingis began his second season on Sevilla's central squad in his third match opposite to Euroleague team Laboral Kutxa, forwarding the team to a 20-point ACB victory on 2nd November 2013.

Kristaps jagged a career-high with twelve points, six rebounds, and four blocks. Porzingis broke his scoring record again while playing against Real Madrid on 30 November 2013, nearly forwarding his mates to win the game.

On 28 April 2014, Porzingis became eligible for the 2014 NBA draft. Before and after Porzingis made his decision, he had grabbed the attention of the NBA Association teams like Orlando Magic, who organized the 12th overall pick, and went to Europe to scout him.

The Oklahoma City Thunder were also about to choose him with the 21st pick if he remained with the team. Porzingis was considered as an unfinished but talented player and entered top-15 draft pick.

As said by DraftExpress.com, Porzingis was the fourth-youngest chance in their top-100 rankings. One of the league's general managers commented on him:

He is very talented. He wasn't ready, but we would've seriously considered drafting him anyway. If he continues to develope the game, get more minutes and his body develops, I think he could be a top-five pick in 2015. He was that kind of talent.

On 30 July 2015, Kristaps agreed and signed the rookie-scale contract with the Knicks. On 28 October 2015, Kristaps made 16 points in his NBA debut, forwarding New York to a 122-97 season-opening win over the Milwaukee Bucks.

On 11th December 2016, Porzingis secured 26 points, 12 rebounds, and a career-high-tying seven blocks in a 118-112 winning against the Los Angeles Lakers.

Kristaps Porzingis is twenty-two currently and is not involved in any kind of public romantic relationship or affairs. He has not been caught dating any girlfriends till date.

However, Porzingis was rumored to be dating Abigail Ratchford, an actress, and model.

The Latvian player posted that he was satisfied with the team despite some arguments with the managers, on Twitter. Kristaps later said he was hacked and reported the social media company in no time.

Kristaps Porzingis earns a huge amount of money from his successful career as an NBA player.  He has a total net worth of $ 4 million. In 2015, Porzingis signed a 2-year contract of $ 12.95 million with the New York Knicks.

The contract was approved and Kristaps earned an average salary of $ 6.48 million. Moreover, The skilled player earns from endorsements as he signed a contract with Adidas in 2016, prior to his formal deal with Nike.