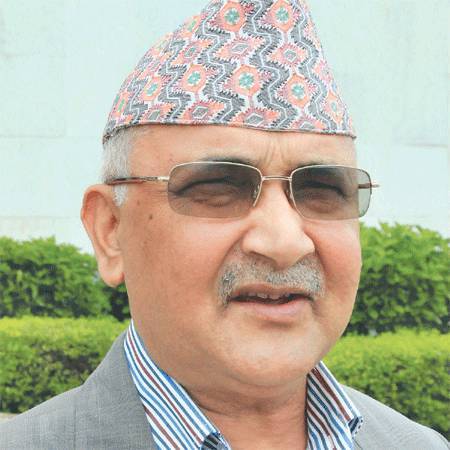 Khadga Prasad Sharma Oli, better known as KP Oli is a former Prime minister of Nepal. He is the president of Nepal's one of the biggest party UML. He served as the Prime minister from 12 October 2015- 4 August 2016. Oli is known for his humorous lines.

K.P. Oli was born as Khadga Prasad Sharma Oli on 22 February 1952 in Atharai Iwa, Terhathum, Nepal where he spent most of his childhood days. Oli lost his mother when he was 3. He migrated to Jhapa district with his father after his mother's death.

He attends Adarsha Secondary School in Jhapa. In 2028 of the Nepali calendar BS, he passed his SLC examination and thus completed class 10.

He did not study further than that. However, he recently received a doctorate from Green Ford International University. He was keen on becoming either a teacher or get into the medical or engineering field. Instead, he joins politics.

KP began his political baby steps by landing on the political activities in 1966 influenced by Marxism-Leninism. Gradually, he went on to become a Member of the Communist Party of Nepal in February 1970.

He was always against violence and thus got involved in subversive politics in contradiction of the tyrannical party-less Panchayat System at that time. For his activities, he was arrested for the first time in 1970. A year later he became the District committee member of a party and soon the Chief of the Jhapa Movement Organizing Committee in 1972.

For his movement, Oli was arrested and confined into the numerous jails and toxic cells of Nepal for 14 consecutive years from 1973 to 1987. After being released from jail in the year 1987, he became a Central Committee Member of UML as an in-charge for Lumbini Zone until 1990.

He then went on to hold the post of chief of a foreign department of CPN (UML) in 1992. Oli became the Founder President of the National Democratic Youth Federation of Nepal(DNYF).

Subsequently, he became a member of the parliament in the House of Representatives (HOR) from Jhapa district’s electorate no. 6 in the year 1991 and from Jhapa electorate no. 2 in 1999 as well. In no time, he became the Chief of the department of publicity and propaganda.

In the ever-changing political situation of Nepal, Oli became the Cabinet Minister: Ministry of Home through the short period of 1994 to 1995. Then in 2006, Oli became the Deputy Prime Minister of Nepal during the interim government. He was also assigned to look into the death of fellow politician Madan Bhandari.

From April 2006 to 2007, KP was assigned as the Minister of Foreign Affairs. While in the 2nd Nepalese Constituent Assembly, Oli defeated and won the Jhapa–7 seats in 2013 as a CPN-UML contender. Oli is currently designated as the Chief International Dept of the CPN-UML Parliamentary Party.

KP Oli was the second Prime Minister under the newly adopted Constitution of Nepal. He served as the 38th Prime Minister from 11 October 2015 to 3 August 2016. He

Oli is married and his wife is Radhika Shakya,  with whom he has a daughter. He met his wife after he got out of jail. The couple has been married for a long and hadn’t had any reported divorce and conflict. He currently resides in Bhaktapur with his family.

Oli is currently 63 years old, has traveled around 30 countries across the world, and has gained a lot of political success of being one the chief of one of the most recognized parties of Nepal.

Oli was immediately rushed to Bangkok’s Bumrungrad International Hospital recently through the air after his case of Meningitis worsened. Doctors treated underlying diseases as well. But he is currently well and has his death defeated. His bio can be found on social media sites like wiki and another popular sites.