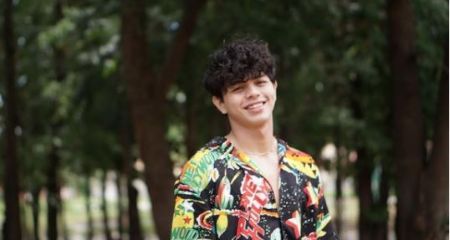 Kokoy De Santos is a Filipino actor best known as Pedro in The Hopeful Romantic, Miko in Fuccbois, and Gavreel Alarcon in Gameboys. Similarly, he is a dancer, singer, and commercial model.

How Old Is Kokoy De Santos? What Is His Height?

Currently, his age is 23 while he stands at the height of 5 feet 8-inch or 173 cm tall. By nationality, he is Filipino and his ethnicity is Asian.

Regarding Santos' education, he attended the Institute of Culinary and Kitchen Services.

How Did Kokoy De Santos' Come Into The Spotlight?

Eventually, in 2018, he grabbed the limelight as Pedro in the movie The Hopeful Romantic alongside Pepe Herrera, Ritz Azul, and Nikko Natividad. His other notable acting credits are Hellcome Home, Maalaala Mo Kaya, I Am U, Gameboys, Pearl Next Door, and Oh, Mando!.

Recently, Santos portrayed the role of Mon Ortega on the television series Stay-In Love (2020–2021) starring Ruffa Gutierrez, Bobby Andrews, Maris Racal, and Ashley Colet. He is all set to appear in his upcoming project Gameboys the Movie.

The multi-talented Santos has so far altogether 27 acting credits under his name. He earns all his riches as an actor, singer, and commercial model.

Kokoy De has never revealed any details about his fortune. As per some online sites, he has an estimated net worth of $400,000 in June 2021.

Personal Life: Is He Currently Dating Anyone?

Gameboys' actor has always been mum when it comes to his personal life. At the moment, it is not known if he is single or dating anyone.

Details about his off-screen love life are under wrap. Talking about his on-screen personal life, Kokoy De was in a relationship with his co-actor Elijah Canlas on the show Gameboys. In the Pinoy Boys' Love (PBL) Awards 2020, they even won the Best Couple award.