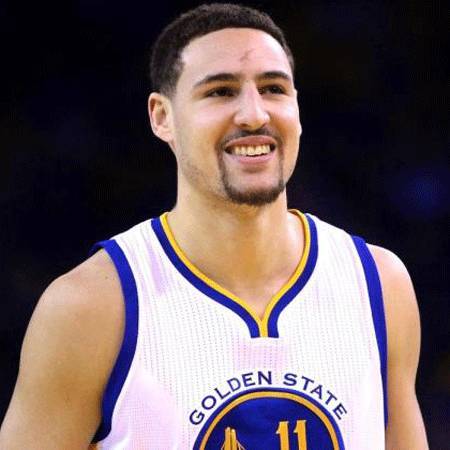 Klay is currently 25 years old, weighs around 98 kgs and is 6 feet 7 inches tall. He was named  NBA  All-Star, NBA All-Rookie First Team, 2x First Team All-Pac-10. There was a controversy when he was suspended during the final season with Washington State University after his misconduct criminal quotation for marijuana possession was subjected.

Kaly Thompson was born on 8th February 1990 in Los Angeles, California to mother Julie Thompson and former NBA player, Mychal Thompson. When Klay was 2 years old he moved with his family to Lake Oswego, Oregon.

And when he was 14 years old he moved to Ladera Ranch, California along with his parents and two siblings. His older brother Mychel played basketball for Pepperdine University whereas his younger brother Trayce Thompson was drafted in the 2009 MLB Draft by the Chicago White Sox.

Klay went to Santa Margararita Catholic High School in California where in his junior year, he was named the All-Area second Team and to Orange County third team for his excellent basketball skills. Later in Klay’s senior year, he averaged 21 points per game. He attended the Washington State University in 2008. As a freshman, Klay played 33 games and averaged 12.5 points per game.

While in his soph 0re years, Klay went on to score 43 points in a tournament single game which was the third highest single-game point total in Washington’s history. He went on to average 19.6 points. In his junior year, Thompson went on to finish the season with 733 points.

Later he announced in 2011 that he was ready to be drafted in the 2011 NBA draft. So he was selected by the Golden State Warriors in the first round as the 11th overall pick. He began as a no.11 shooting Guard in Golden State Warriors. In 2012 Klay announced that he was ready to be selected in the 2012 NBA All-star Weekend Rising Stars Challenge but was not selected. Later after the decision was made, improvement in all fields was seen in Thompson’s play.

Klay was previously dating internet sensation, Hannah Stocking but they recently had a breakup over an Instagram dispute. There have been rumors that Klay is currently dating Chris Brown’s ex, Karrueche Tran.However, the couple has not confirmed anything in the media. Klay's estimated net worth is $3 million.