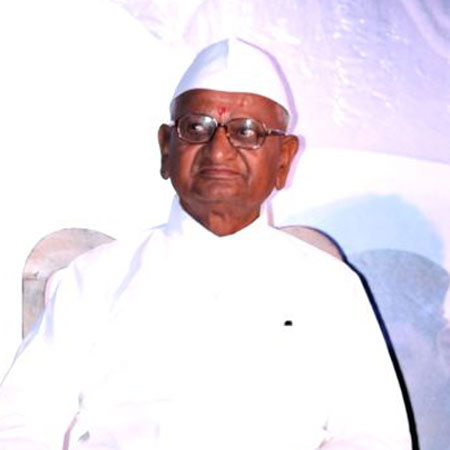 Kisan Baburao Hazare who is also known as ‘Anna Hazare’ was born on 15th June 1937 in Bhingar India. He is an Indian Social activist. He led the movement to increase government transparency, investigate and punish corruption in public life, and promote rural development. His father was an unskilled laborer in the Ayurveda Ashram Pharmacy. He was the eldest among seven siblings among them two are sisters and four brothers.

Kisan Baburao Hazare ended his schooling when he was in seventh standard because of the lack of financial support. He then started selling flowers and managed to own two flowers shops in the Mumbai city. In the year 1960, April Anna was drafted in the Indian Army as an army truck driver. Later, he was attested as a soldier. In 1965 during the Indo-Pakistani War Anna was posted at the border in Khem Karan sector where he was the sole survivor of an enemy attack. Anna worked in the army from 1960 to 1975, at several posts including Nagaland, Bombay, Punjab, and Jammu.

In the year 1991, Kisan Baburao Hazare launched a movement against the corruption, the Bhrastachar Virodhi Jan Andolan. It was a popular movement to fight against the corruption in the Ralegaon Siddhi. He protested alleged malpractice in the purchase of power looms in May 1997 by the Vasantro Naik Bhathya Vimukt Jhtra Governor P.C. Alexander. Anna was imprisoned for three months in the Yerawada Jail on 9th September 1998. But later on, due to the public protest, the Government of Maharashtra ordered him to release.

Kisan Baburao Hazare also led a movement in Maharashtra state in the early 2000s which forced the state government to enact a revised Maharashtra Right to Information Act. On 5th April 2011, Anna began ‘indefinite fast’ as a part of the campaign to form a joint committee of the civil society representatives and government. The movement attracted the attention of thousands of supporters as well as the attention of the media. Anna started the protest from Delhi and it spread to Mumbai, Bangalore, Ahmedabad, Aizawl, Guwahati, Chennai and other cities too.

In the year 2007, the Maharashtra got out of grain-based liquor policy to encourage the production of liquor from the food grain but Anna opposed the government’s policy. Kisan Baburao Hazare opposed by arguing that the state had to import food and it is promoting the production of liquor from food grains which were not appropriate. Later on, he began fasting and the government promised to review the policy and Hazare ended the 5 days fast.

Recently in 2016, an Indian movie named Anna was released which was a biographical film based on the life of the Hazare.

Kisan Baburao Hazare is unmarried. He had no any relationship in his whole life. He declared his bank balance to be Rs 67,183 and Rs 1,500 cash at hand,  on the 16th April 2011. He has lived his whole life in a small room. He owns his family land of 0.07 hectares and his other two pieces of lands were donated by him to village use.