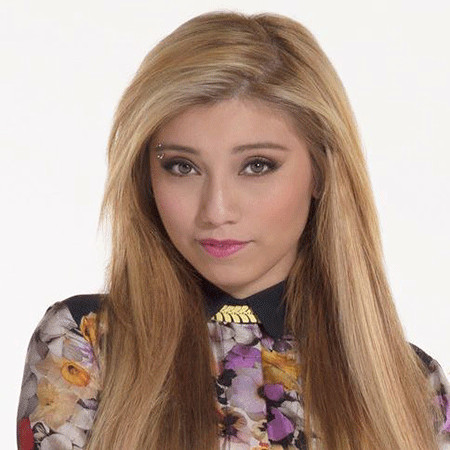 Two times Grammy Award winner, Kirstin Maldonado is a multi-platinum recording artist. She is best known as the only female in world-renowned pop sensation Pentatonix.

Kristin Taylor Maldonado was born on 16th May 1992 in Fort Worth, Texas, USA. Her mother Angelica Maldonado is Spanish-Italian and her father is a Mexican. Therefore, she has mixed ancestry though she has an American nationality.  Kristin Maldonado wanted to be a singer since she was a little girl.

Kristin Maldonado was raised by her mother in Arlington, Texas and has attended Holy Rosary Catholic School later enrolling at Martin High School. After graduating from School in 2010, she went to the University of Oklahoma to study Music Theater Performance. But she dropped out for Pentatonix.

The journey of Pentatonix goes back when Kristin was a little girl. Kristin convinced her mother to enroll her in voice lessons after singing at her wedding reception. Kristin Maldonado then joined the local theater where she had met Mitch Gra s si, her future band member. Meanwhile, on the time she was at High School, she had met Scott Hoying. These three friends later created an acapella trio and started singing in the school which had made them popular in the school.

In 2011, Scott Hoying contacted Kristin Taylor Maldonado to participate in NBC's acapella competition The Sing-Off. The group included Scott Hoying, herself, Mitch Gra s s, Avi Kaplan, and Kevin Olusola and formed Pentatonix. The group became the winner of the third season of The Sing-Off and has released several albums and EPs after the victory. The group has 2 billion YouTube views, 12.1 million subscribers in their YouTube Channel, has toured the world performing and has won two prestigious Grammy Awards.

Kirstin Maldonado's Net Worth and Salary

Kristin Maldonado performs periodically on the events. She has also appeared in music videos and also has acted in an episode of Bones as Liz Dervan. According to HuffingtonPost, her annual income with Pentatonix is $750,000 and the net worth is $6 million.

Talking about the personal life of this young and charming singer, she is engaged to her boyfriend Jeremy Michael Lewis on May 29, 2016, in Paris. Kristin Taylor Maldonado has posted her picture on Instagram with the diamond ring on her finger to share the news. On the other side, her fiance had tweeted 'She said yes' on his Twitter account after being excited about being accepted. The couple is likely to get married in soon future.

Kristin Maldonado was rumored to be in a relationship with her band-mate Avi Kaplan which later came out to be false. Again there was the rumor of her demise which gained much attention after a Facebook page "R.I.P Kristin Maldonado" attracted one million likes. Kristin Maldonado's representative said that she is not dead; she is alive and well and has joined the list of celebrities who have been victimized by this hoax.