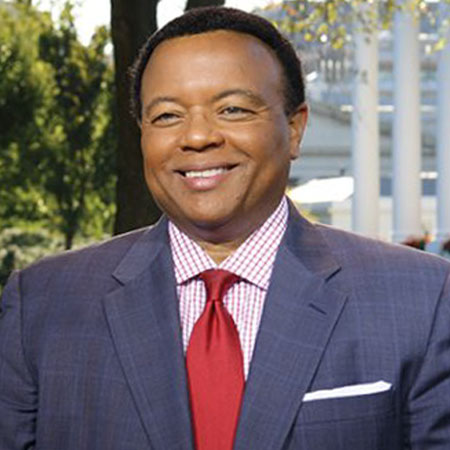 Kelly Wright is an American reporter. He is a former reporter for the Fox News Channel. From 2006 to 2008, he was the co-host of Fox and Friends Weekend. Starting his journalism career in 1977 working with the United States Army, Wright also has worked for many other reputed networks like WAVY-TV/WVBT-TV and more.

Kelly Wright was born in the United States. He holds American nationality and regarding his ethnicity, Kelly is mixed. The information about his age and date of birth are yet to be disclosed.

Wright attended the Oral Robert University and completed graduation from there in 2008.

Wright worked as a co-anchor of the WVBT-TV. There he served in the program News at Ten. In the program, Kelly Wright reported in Norfolk, Virginia and covered the wide range of stories earned him several honors.

Kelly successfully covered an event held in Benin, West Africa. In the event, African presidents like Mathieu Kerekou of Benin along with the representatives from England, Jerruald Rawlins of Ghana, France, and England apologized for their involvement in slavery.

After that, Wright got the position of the general reporter for the Washington-based Fox News Channel. He also worked at FNC, where he co-hosted the show named Fox and Friends Weekend.

In the year 2004, Kelly spent about three months reporting on events in Iraq. Before that he worked as a weekend news reporter for the WRAL-TV in North Carolina. He interviewed the first lady Laura Bush in April 2007. In the exclusive interview, he collected the information about the President's final term.

Lawsuit Against Fox News And Settlement

The former Fox News reporter Kelly Wright and 17 other current and former employees filed a racial and gender discrimination lawsuit against Fox News, in 2016. It did not take any action for a long time and finally reached a roughly $10 million settlement, in May 2018.

Kelly Wright has made a certain agreeable amount of money from his work in various networks. In 2019, the journalist has a net worth of $2 million, as per some authorized sources.

Reporter Kelly Wright is a married man. He has been sharing a successful married life with his loving wife Loretta Wright for a long time now. He has two sons with his wife. It seems he is a very private person as there less information about his personal life.

He is a family person and likes to spend quality time with his wife and sons. He currently resides in Washington.D.C with his spouse and kids.

Kelly likes to sing in his leisure time. Singing is his favorite thing to do during his free time. He also occasionally sings with singer Mike Huckabee as an occasional member of Mike in-studio band named The Little Rockers.

He is a friend of Joel Osteen, a producer, and a director.