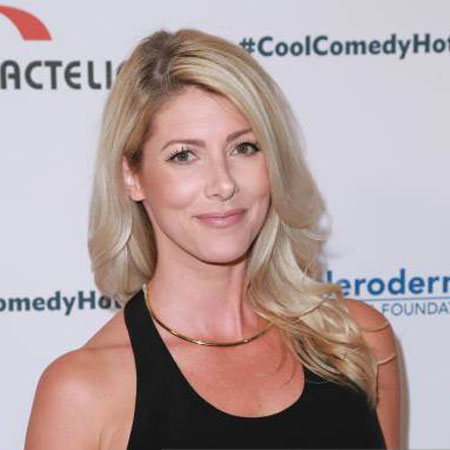 American blogger, Kelly Rizzo is the founder of the blog, Eat Travel Rock. She gained a huge popularity from the blog which was later made into a web series featuring on The Food Channel's website. Rizzo was also crowned “Travel Queen” by Michigan Avenue Magazine. Similarly, she has hosted Rocking Right Now on a Chicago radio station and also VH1's Big Morning Buzz Live alongside Nick Lachey.

Rizzo got engaged to her boyfriend of two years, Full House star Bob Saget in November 2017. The couple shares the news via Instagram.

Kelly Rizzo was born on 19th May 1979, in Chicago, Illinois, the United States of America to Sharon Rizzo and Santo Rizzo. She belongs to white ethnicity and holds an American nationality.

Rizzo's family are in a real estate business-They are involved in the business since 1977. She also joined her family after graduating from the college. Rizzo graduated with Journalism/Italian from the University of Lowa in 1999. She then went to Depaul University and earned B.A., Communications in 2004.

Kelly Rizzo started working for the nation's leading condominium developer in 1995 under the guardianship of her parents. In 1999, she became a licensed Realtor and learned about development as well as general real estate brokerage. She has an experience of working on 6 large condo conversion with a total of over 2500 units. She served as a co-sales manager of 2000 N. Lincoln Park West in 2004. The condo conversion became the most successful vintage in Chicago history.

After a year, Rizzo co-founded a brokerage firm, Rizzo Realty Group with her parents. The firm is specialized in investment properties and vacation homes, they sold over 600 condominium units nationwide. They also received a positive buzz in Chicago for organizing 'Building Wealth Through Real Estate' seminars which were educationally based program to demonstrate the real estate as the best and most secure long-term investment. She served as Vice-president for five years until resigning in 2010.

Kelly Rizzo also worked as the host and producer in the Food Junkie, Chicago for seven months. Currently, she serves as the team leader in Dream Town Realty in order to provide excellent service to homebuyers and sellers in Chicagoland. She joined Dream Town Realty in July 2010.

Apart from her real estate business, Rizzo was also involved in blogging and traveling. Later turning her hobby into work, she began her career as a blogger and founded the blog, Eat Travel Rock. The blog became massively popular and Rizzo turned her blog into a web series with the same name, Eat Travel Rock TV in January 2013.

Kelly Rizzo is also the host of VH1’s Big Morning Buzz Live alongside Nick Lachey, and Chicago radio station's Rocking Right Now. She was also featured in a music video, Get Your Shine On, by Florida Georgia Line.

According to a few reputable online sources, Kelly Rizzo has an estimated net worth of around $300k as of February 2018, but it has not confirmed officially. Her main source of income is her real estate business and along with that she also has own blog and few TV shows.

According to her Instagram posts, Rizzo has a big house with swimming pool in Los Angeles, California.

Kelly Rizzo got engaged to Bob Saget in November 2017. Saget is an American stand-up comedian, actor, as well as a television host. The couple first met back in 2015, through a mutual friend in Chicago. They dated for more than a year, before getting engaged. Rizzo and Saget have an age difference of 23 years.

Rizzo is very close with her family and spends most of the time with them. She is also quite active in social media and has thousands of followers.

Here is the video of Kelly Rizzo talking about concerts and comedy shows including Gwen Stefani, Bob Saget, Dolly Parton and Josh Groban on the show You & Me.