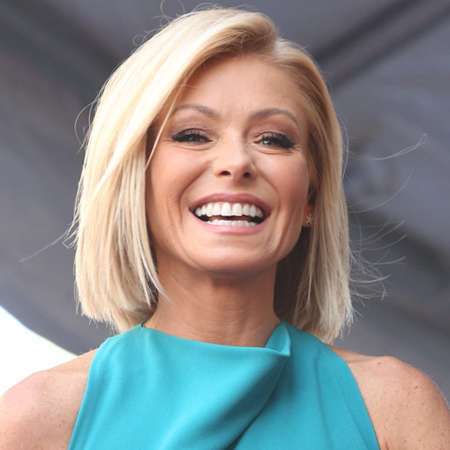 Kelly Ripa is an American actress, talk show host, dancer, and television producer and is notable for her role as Hayley Vaughan on the ABC daytime soap opera, All My Children.

Similarly, she is also known as the co-host of the renowned morning talk show, Live! With Kelly. Likewise, Ripa is also known as Faith Fairfield on the ABC sitcom, Hope & Faith. In 2014, Kelly Ripa was named as of the Most Powerful Media People in Media reported by The Hollywood Reporter.

Kelly Ripa was born on October 2, 1970, in Stratford, New Jersey, under the birth sign Libra. She is the daughter of Joseph Ripa, a labor union president and bus driver, and Esther, a homemaker.

Similarly, Kelly also has a younger sister, named Linda, a children’s book author. She has one-quarter Irish and three-quarters Italian ancestry and she was raised Roman Catholic.

Kelly Ripa’s father has been the Democratic Country Clerk for Camden County, New Jersey, since 2009. Kelly has always been interested in acting and in fact, she is the first to enter the acting profession.

Kelly Ripa, at the age of 19, started studying ballet at the age of three and also appeared as a dancer on ‘Dance Party USA’. Kelly went to Camden Community College in New Jersey and performed in local theater productions, there. During that time, she also landed the role of Hayley Santos on the ABC daytime drama, ‘All My Children, in 1990.

Audiences, as well as critics, were very impressed by Kelly Ripa's performance and she was also nominated for a Daytime Emmy Award for Best Supporting Actress for her role as Hayley in both 1993 and 1999.

Live! with Regis and Kelly

In 2001, Kelly Ripa joined co-host Regis Philbin for ABC’s morning talk show ‘Live! With Regis and Kelly, replacing longtime co-host Kathie Lee Gifford. Her upbeat sense of humor and endearing personality proved to be the best for their show. Similarly, she also continued to appear on ‘All My Children’ alongside her husband and co-star Mark Consuelos until she left the show in 2002.

In 2011, Philbin announced his retirement from Live! And then Kelly took over hosting duties and eventually, the show’s name was changed to ‘Live! With Kelly’.

After Philbin left the show, Ripa had various co-hosts on the show and she even won its first Emmy in 2012. Later on, Michael Strahan was chosen to pair up with Kelly, and the show’s name was changed to ‘Live! With Kelly and Michael’.

Kelly Ripa has always been known for her television work but she has also featured in several feature movies.

Kelly appeared in the acclaimed Miramax feature ‘Marvin’s Room’ in 1996 with Leonardo DiCaprio and Meryl Streep. Similarly, she also won the Best Actress Award at the New York International Independent Film and Video Festival for her amazing work in ‘The Stand-In’

Kelly Ripa can be considered one of the hardest working people in show business. She has also appeared in the sitcom ‘Hope & Faith’ and has also been the spokesperson for brands like Pantene, TD Bank, and Tide. Currently, she is the brand ambassador for Electrolux and Ryka.

Similarly, her other television projects include ‘The Great Buck Howard’, ‘Fly Me to the Moon, ‘Damages’, ‘Google+ Hangout’, ‘Broad City, and so on. Similarly, Kelly and her husband Mark founded Milojo, a highly successful production company in 2007. The name of company was named after their three children Lola, Joaquin, and Michael.

Kelly Ripa has an estimated net of $120 million. This is no surprise to anyone that she has such an amazing net worth as she has been working all her life. Basically, she has earned through her show Live! There, she used to earn $20 million in salary per year.

She is loyal to the brands Electrolux and Apple and is passionate about traveling and shopping, and designer wear.

She lives in a lavish house worth $27 million in Townhouse New York. In 2014, they sold their Brentwood house for $20 million valued at $24.5 million.

Kelly Ripa married Mark Consuelos in 1995. The couple first met on the set of ‘All My Children and eventually fell in love.

The couple has been blessed with three children Michael Joseph, Lola Grace, and Joaquin Antonio Consueios. It has already been twenty years since they are married and are happy with all they have.

The Stand-In Live with Kelly Fly me to the Moon