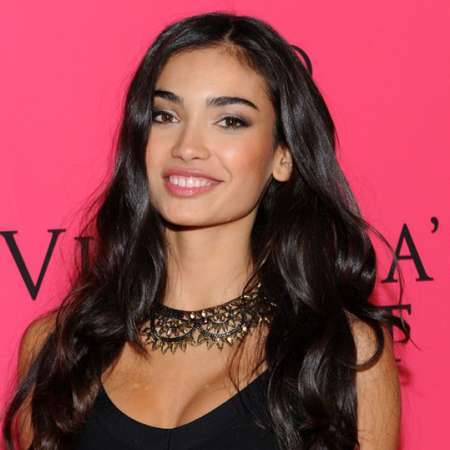 Kelly Gale was born on 14 May 1995 and she is just 20 years of age. Her place of birth is Gothenburg, Sweden. Gale belongs to Indian- Australian descent. She was born as the daughter of Indian mother from Poona and Australian father from Victoria, Australia. According to the ethnicity she is Asian Swedish. Gale’s nationality is Swedish. Kelly’s has not updated any information relating her sibling.

Kelly Gale’s information regarding her educational is not updated briefly she attended Näsetskolan and Göteborgs Högre Samskola. She was very eager to sports from her early age and she has also part of Näsets SK in Gothenburg. She also played tennis since her age of seven.

She was spotted by a model agency when she was only 13 years, he parents also supported her to develop her career in modeling but she started modeling after a year. Gale’s first modeling job was H&M which created a lot of attention.

In 2012 she attended her one of her first biggest fashion show of Chanel. A year after she got a chance to be featured in Victoria's Secret Fashion Show for the first time. Gale has also been part of advertise of H&M and H-I-G-H. Kelly has also been a part of several brands like Tommy Hilfiger, Band of Outsiders, Ralph Lauren, Christopher Kane, Tom Ford, Jean Paul Gaultier, Academy of Arts, Nanette Lepore and L'Wren Scott.

Kelly has also been featured in cover page of French Revue des Modes and also in Teen Vogue, Vogue Italia, Elle and Vogue India. In 2014 she was chosen to walk with Polo Ralph Lauren in Victoria's Secret Fashion Show.

Kelly Gale is very beautiful lady with perfect sexy figure. She is very conscious about her health and she pay particular attention to the type of food she eats. She also trains herself about 2 hours every day to maintain her fit. Her fitness regime includes yoga, jogging, boxing a power walking.

Kelly has kept her personal life very secret and there is no any information regarding her previous affair. Though Kelly has been linked with many guys from time to time no any official confirmation has been made by her about her dating. Though there is rumor about her dating with Johannes Jarl and they are also been spotted in many location hanging together but she has not confirmed about her dating. Kelly is not married yet maybe she is looking perfect spouse and she has no any children.

Kelly Gale is a tall beautiful lady with a height of 5 feet and 11 inches. She has perfect figure which measures 32 breast, 23 waists and 34 hips. She has long black hair and brown eyes. Gale has maintained a net worth of about 18 million dollars and Kelly’s salary information in missing.  She has updated bio and career information in IMDb and Wiki.