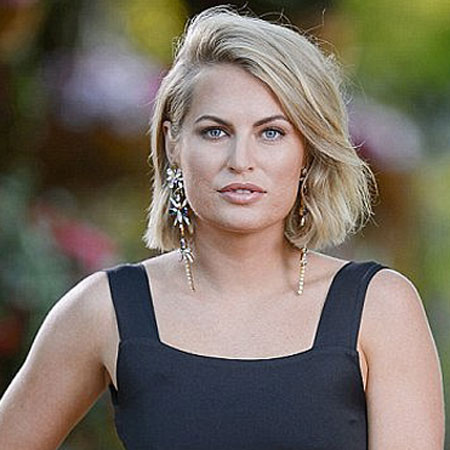 Keira Maguire is an Australian TV personality. She rose to popularity after participating in reality shows like The Bachelor Australia, and I’m a Celebrity…Get Me Out of Here!. She would be appearing in another dating series, Bachelor In Paradise in 2018.

Maguire is unmarried. She has recently confirmed her relationship with Jarrod Woodgate.

Born on May 27, 1986, Keira Maguire is Australian and belongs to White ethnic background. She spent most of her childhood in Bells Beach, Victoria, her birthplace. She has a sister named Jade Maguire.

Her father, Alistah Laishkochav, was a former police officer in New Zealand and was known as Ian Lowe. Later, he changed his name after he migrated to Sydney, Australia. In Sydney, he started his life as self-styled messiah and believed he was Jesus. In 1974, he married his first wife and in quick succession married eight other women.

In August 2016, rumors started about Maguire being part of a cult. Reportedly, she was bought up in a polygamist cult along with 63 siblings started by her dad.

Talking to Woman's Day, she shared about how her mother and grandmother helped her to have a happy childhood away from her father. In her words,

"I am not in a position to comment on Alistah Laishkochav. My mother removed my family from that environment when I was five years old, over 25 years ago. I was brought up by my mother and grandmother in Brisbane in a loving, caring and compassionate household."

Maguire’s first job was at CoreLogic RP Data, joined the company in 2010 and served as an account manager for four years. She has also been featured in the Australian gossip magazine, NW (News Weekly).

Maguire participated in the fourth season of popular reality series, The Bachelor. The series premiered on July 27, 2016. The season featured Richie Strahan, a 31-year-old Rope Access Technician from Perth, Western Australia. She was 29 at the time.

In 2017, Maguire participated in another reality TV series; I’m a Celebrity…Get Me Out of Here!.  The season was set in Kruger National Park, South Africa, and was hosted by Julia Morris and Chris Brown.

In 2018, Maguire would be starring in an upcoming dating series, Bachelor In Paradise.

Keira Maguire’s net worth is not public at present. Her net worth can be close to million, as per her lifestyles. In 2017, she spent around $35,000 for plastic surgery.

She also did lip fillers, Botox, cosmetic eyebrow tattoos and vampire facials. She has done a nose surgery that was carried out by a Sydney cosmetic surgeon, which was the most expensive procedure she ever did. She also uplifted her breast from A cups to a C.

Keira Maguire is unmarried and has no children. She is currently dating her Bachelor in Paradise co-star Jarrod Woodgate. Woodgate is a runner-up of The Bachelorette Australia (2017).

The pair confirmed their romantic relationship in January 2018 during a steamy romp on Iluka Beach, Northern New South Wales. They were spotted kissing passionately at the time.

Maguire who live in Sydney was spotted many times in Melbourne and on one occasion she was seen visiting Woodgate's house. They became inseparable after meeting in the spin-off Bachelor In Paradise season 1.

There were rumors of their engagement after Bachelor In Paradise released a trailer featuring a mystery man asking 'Will you marry me?’. However, many fans are sure that Woodgate is the man and the couple is already engaged.

There were rumors regarding her relationship with Michael Turnbull, Bachelorette contestant, in 2017. However, Maguire publicly denied their relationship and claimed that Michael blocked her on Instagram after she asked him not to post pictures of them together.