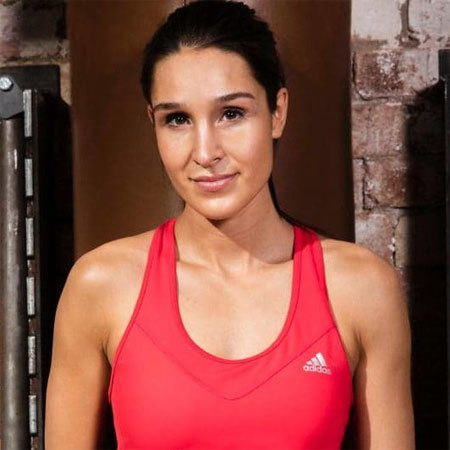 Kayla Itsines is an Australian author, entrepreneur and also a personal trainer. She is the author of the series of fitness eBooks named Bikini Body Guides and a meal-planning and workout app, Sweat and Kayla.

Kayla Itsines was born on 21st May 1991 in Australia. She was born to Anna and Jim Itsines and both of them were teachers.  She is of an Australian nationality and of White Australian ethnicity. She has a younger sister named Leah who is a personal trainer and also a food stylist.

Firstly, her grandparents opposed her decision to become a personal trainer but later on after convincing them they came to support her.

Kayla Itsines had an interest in fitness and she used to play basketball since her childhood. At the age of 15/16, she got a medical advice that due to endometriosis she might have future fertility problems.

She did research on that and found that being healthy, fit and strong could diminish infertility, Kayla started working at a gym.

At first, Kayla wanted to become a beauty therapist but left that and studied to become a personal trainer. At the age of 18, Kayla completed graduation from the Australian Institute of Fitness as a Master Trainer.

After completing graduation Kayla Itsines started working at a women’s gym in Adelaide. Later on, she realized that the machine based classes did not help her clients to achieve their goals. So, one day she ran a class with a routine of aerobics without the machines which her clients loved. She then started a mobile personal training business.

Kayla also started training her sister’s friend so that she could improve fitness and could play Netball on her high school team. To get more popularity her cousin who was only 12 years at that time suggested using Instagram to organize the photos.

Within the few months, Kayla Itsines started getting a regular request for help and advice. On the other hand, her partner Tobi Pearce suggested her to compile her routine into eBooks so that it could be sold online. In 2013 March, they co-founded the Bikini Body Training company where Itsines directed and Pearce became the CEO.

Itsines is an unmarried woman. She is in live-in together relation with Tobi Pearce since 2013. She first met him at a gym when he was studying double-degree in Commerce and Law and also studying to be a personal trainer.

In 2011, Kayla Itsines gave up drinking alcohol and believes that nobody should drink alcohol who pursue the healthy lifestyle. She loves dogs and has two Siberian huskies named TJ and Ace.

Net worth, and Body measurements

Kayla is 5 feet 3 inch tall and has perfect body measurement size of 34-24-35. The estimated net worth of Kayla Itsines is $46 million.