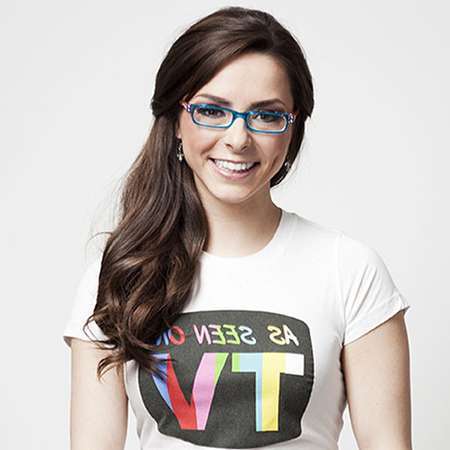 Katie Linedoll is a beautiful, smart and a very talented Television personality. She is a TV host, producer, writer, Global tech consultant and sport-tech expert in ESPN, ESPN.com and ESPN The Magazine.

She has contributed in the tech segments of CNN, CBS Early Show, CNN Newsroom and The Nate Berkus Show. She has been the host on HSN where she appeared for the sales of electronic and technology related items.

She had made the sales of over $20 million for the network from that show. She also has appeared as the co-host in A&E reality series We Mean Business. She has also participated in the media projects of Dell, Hyatt, IBM, HP, Cadillac, and Lincoln. While working on these projects, she also travelled across the country being a lead spokesman on Innovations in technology and moderate panels.

Katie Linedoll has started her career as a host of ESPN2 in the program SportZone. She later became the associate Producer at ESPN’s Sports centre. Her work there earned her the Emmy Awards. Later, she moved back to camera world and became a resident technology expert of HSN Network.

She has been one of the most in-demand tech experts in the United States. She has given her expertise counseling to the CBS.com, Forbes.com, Parents.com, Oprah.com, Yahoo! Finance and others. She has also contributed to Marie Claire, Shape Magazine, People Magazine, Fitness and other publications.

Katie was born in Erie, Pennsylvania, USA. She has been a person who is enthusiastic about technology since her childhood which was also reflected by the networking certificates she achieved even before graduating her high school. She has graduated bachelor’s degree from Rochester Institute of Technology in Information Technology New Media. There has not been much information on the internet websites, about her year of birth or parents or her other early life information.

Katie Linedoll is an avid fan of Wrestling. When she is not working, she always watches Monday Night Raw. Most interestingly, she has not missed any episodes of  RAW. Katie is also a volunteer in a nonprofit organization called NYC Candlelighters, which serves the families of children who are undergoing cancer treatments. Even being busy with her professional work, she has managed time for noble works.

A beautiful, in-demand, young and energetic Katie is no doubt the name for many of her fans to pound their heart to the max. Her age, height and body measurements are not disclosed yet but looking at her pictures, she can't have crossed the age of 35. She looks stunning elegant with her long, toned legs. She has maintained her clean posture in the media and has kept her personal profile low.

Thus, there is no news or rumor about her boyfriend or dating anyone. Possibilities are high that she is still single as she is very busy with her schedule and career. Thus, her male fans can relax for the time being and dream of their chance to date her.

There are lots of her hot and sexy pictures available in the internet and wiki will do the best for her bio as there  are not much information available about her in the internet websites. However, it is really hard to find her in bikinis in the available pictures. She is an active user of Twitter. Her fans can follow her @KatieLinedoll and get updated with her recent activities.