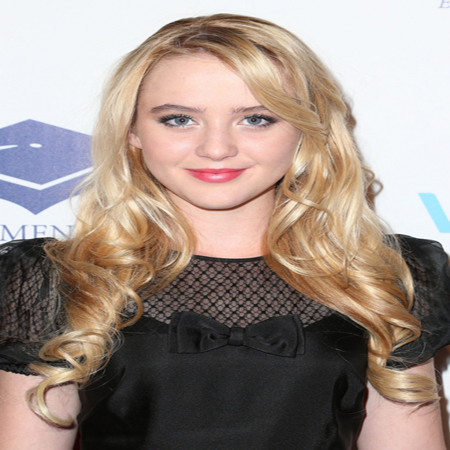 Kathryn Newton is an American actress, Best known for portraying as Alex Nelson in 2012 American found footage supernatural horror film, Paranormal Activity 4  for which she earned the 2013 Young Artist Award for Best Leading Young Actress in a Feature Film. She currently filming The Pact alongside T.C. Carter, Miles Robbins, and Jimmy Bellinger.

Newton is also known for portraying the older version of Claire Novak in the CW series Supernatural and as Louise Brooks in the CBS television series Gary Unmarried.

Kathryn Newton is an American national born on February 8, 1997, in the United States. Kathryn is the daughter of Robin Newton and David Newton.

Kathryn got her graduation from the Notre Dame High School in Southern California. Newton was interested in acting since the young age. Newton was only four years old when she made her debut on TV as Colby Marian Chandler in the soap opera “All My Children” in 2001.

Around the age of 5, Newton featured in a short movie, “Abbie Down East.” This was just a starting as she pretty much spent her childhood doing films and TV series.

Kathryn Newton initiated her amateur acting career from the age of four by starring in a soap opera “All My Children” in 2001 and did that series until 2004.

Newton took a break and returned to TV in 2008 joining the cast of “Gary Unmarried.” Kathryn was also featured in the major role of Louise Brooks for 37 episodes from 2008 to 2010.

Additionally, Newton featured in various TV series including “Mad Men,” “Supernatural”, “Dog with a Blog,” and so on. In 2012, Kathryn made her major break on the big screen in a feature movie when she portrayed the role of Alex Nelson in “Paranormal Activity 4”.

Similarly, Newton did other movies such as “Bad Teacher,” “The Martial Arts Kid,” and so on. Recently, she is busy for her upcoming movie, Three Billboards Outside Ebbing, Missouri which release in 2017.

During her school days, she routinely shot in the 70s, and her lowest 18-hole score in a tournament is a 69.

Newton also set a school record with a five-under-par round in a nine-hole match and plays to a plus-2 handicap. She also wanted to play in the 2012 U.S. Women's Open, but Newton got the lead in "Paranormal Activity 4" and had to withdraw from the sectional qualifier.

Kathryn Newton might be earned a huge amount of net worth from her career. However, Newton current net worth has not disclosed in social sites yet.