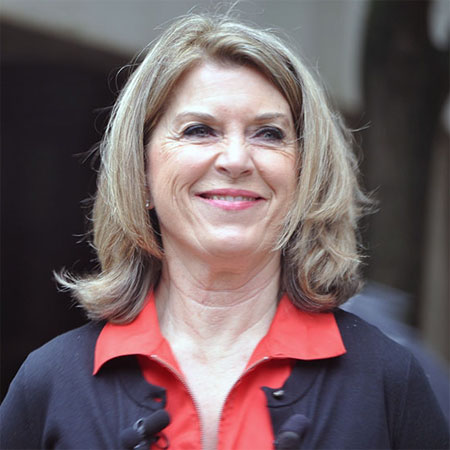 The former Marriott International personality, Kathleen Ann Matthews is currently very active in politics from Democratic Party. She served as the chief communications and public affairs officer for the hotel Marriot. Prior to joining at Marriot, she served in the journalism area for 25 years at WJLA-TV. Kathleen Ann Matthews is also known for being the wife of MSNBC’s journalist Chris Matthews.

Kathleen Ann Matthews was born on August 9, 1953, in San Francisco, California. She is a native of San Francisco. She has not disclosed information on her parents and siblings.

Moving onto her educational qualifications, she completed her schooling at San Francisco. She is a graduate of Stanford University. She is the receiver of the honorary doctorates from the University of South Carolina and Chestnut Hill College in Philadelphia.

Kathleen Ann Matthews has the glorious career in the journalism sector. She spent 25 years of her career in this field. She started out as a production a s sistant at ABC’s Washington DC affiliate WJLA in 1976. She served for the station as a producer, writer, and reporter and as an anchor. She was the host and executive producer of the nationally syndicated program Working Woman and was also the host of the political show Capital Sunday.

Kathleen has been awarded nine local Emmy Awards, Edward R. Murrow Award, and other several awards during her career in journalism. She was even named the 2002 Washingtonian of the Year and ‘Woman who means business ’ by Washington Business Journal.

Kathleen Ann Matthews served as the Executive Vice President of Global Communications and Public Affairs at the hotel Marriott International in 2006. She was responsible for the company’s internal and external communications including global and corporate public relations. She resigned from her position at Marriott in 2015.

Besides, Kathleen Ann Matthews has served in the public sector. She was the U.S. Travel and Tourism Advisory Board to the Secretary of Commerce. She was on the board of U.S. Travel Association, the International Tourism Partnership and the Economic Club of Washington and many others. She is also active in the World Economic Forum Policy Councils.

On June 3, 2015, Kathleen Ann Matthews declared her candidacy for Maryland’s 8th congressional district from Democratic Party. She was competing with Jamie Ruskin. Both were the supporter of gun control, clean energy, campaign finance reform and greater investment in education and health research. However, she was defeated by her competitor Raskin on April 26, 2017.

Kathleen is currently running for the candidacy for state party chair. And in the recent interview held on February 16, 2017, she stated she is focused on the chair’s job.

Kathleen Ann Matthews is enjoying a successful marital life. She has been married to her husband, Chris Matthews, a nationally syndicated newspaper columnist and MSNBC journalist, for more nearly four decades. Kathleen and Matthew got married on 21st June 1980. The couple is blessed with three children who are all grown up as of now.

Their first son, Michael Matthews was born on 1983 and is an American actor. The couple gave birth to their second child, a son, Thomas Matthews on 1986 and the youngest member of the family Caroline Matthews was born on 1989. The family is leading a blissful family life.  Kathleen and her husband are living in Chevy Chase, Maryland. Besides her husband, there is no any known past affairs or boyfriends of her. She has maintained her clean relationship status.

It is unknown how much does Kathleen Ann Matthews earns in a month or a year as no any source has disclosed the fact. However, her husband, Chris Matthews is reported to earn at least $5 million salary per year and has the estimated net worth of $16 million.