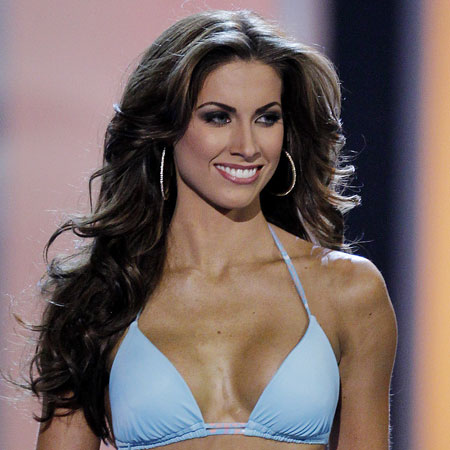 Katherine Webb’s full name is Katherine Elizabeth Webb-McCarron. She is an American beauty queen, model, and a television personality. She is better known for her appearance in the 2013 BCS National Championship Game.

Katherine Webb was born on 24th April 1989 in Montgomery, Alabama, United States. Alan and Leslie Webb are her parents. Katherine has three siblings.

She went to Columbus, Georgia and attended both middle and high school there. She then completed graduation from the Northside High School in 2007. After that, she enrolled at Auburn University and completed graduation with a Bachelor of Science degree in Business Management and Administration in 2011.

Katherine holds an American nationality and belongs to a white ethnic group.

Katherine Webb was ranked in the Top 15 for the title Miss Georgia USA in 2007. In 2012, she was crowned the Miss Alabama USA. She reached to the top ten in the Miss USA 2012 competition.

After that, she offered to be miss USA judge by the present President of the USA Donald Trump and she happily accepted the offer.

Katherine Webb was featured on the cover for the Super Bowl XLVII. She was also a model in the 2013 Sports Illustrated Swimsuit Issue.

Katherine Webb appeared in the 2013 BCS National Championship Game telecast. There an American sportscaster Brent Musburger talked about her and referred her as beautiful and lovely.

He also said that ‘You quarterbacks get all the good-looking women’, and commented that youngsters should practice football in the backyard to meet and get such beautiful women in college.

After the game, all the Brent Musburger’s comment on Katherine was widespread by the media. Because of the incident, her followers on her Twitter account jumped from about 2000 to over 175,000 overnight.

The following day with over 1 million searches, she was one of the Google’s highest trending terms. A video which was about her appearance in the game had over 3 million views in TouTube.

Katherine Webb is married to an American football player AJ McCarron. The couple began dating in December 2012 and was engaged in March 2014. They married on 12th July 2014 and the marriage ceremony took place in Orange Beach, Alabama.

On 8th December 2015, Katherine announced that she was 4 months pregnant with her first child. On 24th May 2016, she gave birth to a baby boy and the child was named Tripp McCarron.

Before McCarron, Katherine had a boyfriend named Tanner Beard. He was an American actor. The couple dated only for three months from August 2012 to November 2012. After that, the couple broke up.

Katherine Webb has a net worth of $1 million. The major source of her income is modeling. She also earns from brand endorsement. Her annual salary is about $350,000, monthly salary is $29,100.

The beautiful 27 years’ model has a very good height of 5 feet 10 inches. She has a perfect body and looks even hotter in a bikini. Her body measurement is 32-23-25. She weighs about 58 kg. She has blue eyes.