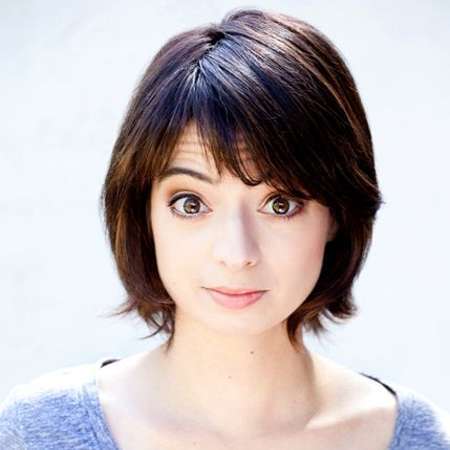 Kate Micucci, an American actress, comedian, singer, songwriter and an artist was born on 31st March 1980. Her hometown is Jersey City in New Jersey. She is one of the two members of the folk musical comedy duo Garfunkel and Oates, the other member being Riki Lindhome. The band name was derived from two famous rock and roll artists, Art Garfunkel and John Oates, both of who were also in a musical duo. In the band, she is the one nicknamed “Oates”.

Kate Micucci attended Nazareth Area High School where she graduated from alongside rock musician Jordan White in the year 1998. She then received an A.A. in Fine arts from Keystone College in LA Plume, Pennsylvania. In 2003, she got a B.A. in Studio Art from Loyola Marymount University in Los Angeles. She spent her college years making puppets.

Besides being an avid musician, she also has got some acting skills. Kate Micucci has appeared in numerous commercials. She played Toni the barista on NBC's Four Kings, guest roles on Malcolm in the Middle, 'Til Death, How I Met Your Mother, Cory in the House, and Campus Ladies, and recurring roles on Scrubs and Raising Hope. In Scrubs, she appeared in five episodes as Stephanie Gooch, a ukulele player. Kate Micucci has also played in feature films like The Last Hurrah, Bart Got a Room, Elevator, and When in Rome.

In 2009, Kate starred in a short film, Imaginary Larry, bade by Riki Lindhome. After a joint attempt with her to convert it into a musical, the musical duo Garfunkel and Oates were formed. In 2013, she got the role in the famous comedy series “The Big Bang theory” as Raj’s potential love interest.

On April 14, 2014, YouTube channel The Age of Blasphemy released a video titled "F*** Me in the A** Cause I Love Jesus" starring Micucci and Riki Lindhome. After the success of the video, Micucci has also announced that she would be the voice of Velma Dinkley in the series “Be Cool, Scooby-Doo!”. A complete discography of her can be found in her wiki and bio sites.

She always wanted to act and make puppets and toys. According to Kate, her singing is quite hysterical as she had never ever thought of being a singer. Even in college, she majored in art, focusing on making and painting puppets. She is often found singing and playing ukulele in Los Angeles, where she has resided since 2008.

Kate Micucci is currently single. She doesn’t have any children, known boyfriends or husband; let alone affairs!  She prefers to keep her personal life and relationship out of media.

Micucci has a net worth of 500 thousand dollars and stands at 5’2” tall. She weighs around 105lbs.