Karis Cameron is a Canadian actress who is very famous for her portrayal in the YTV and TeenNick series Open Heart as Dylan Blake. Also, she is known for her work in series such as R.L. Stine's The Haunting Hour and Signed, Sealed, Delivered.

Karis Cameron was born under the birth sign Capricorn on January 15, 1996, in Canada. She is of Canadian nationality and belongs to white ethnicity. As per the Famousbirthday, she was raised alongside three siblings.

Besides this, there is no single information regarding her early life such as education, parents.

Who Is Karis Cameron Dating?

The 24 years old, Karis Cameron is dating a man named Ty Wood. AS per the recent post of Karis, they have been dating each other since December 2019. 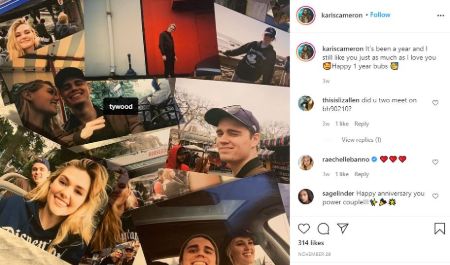 On their one year love anniversary, Karis shared the picture of her with Ty and caption it writing

It’s been a year and I still like you just as much as I love you. Happy 1 year bub

Well, the pair seems to have maintained very strong bond with each other as we can see lets of picture of them together flaunting their love life.

Journey To $500 Thousand Net Worth

Karis Cameron is already halfway to be a millionaire from her career as a actor since 2011. In Canada, the actor is paid around $98,965 per annum, so she also might be getting paid her salary in the same range.

Talking about her career in detail, she made her acting debut in years 2011 from her appearance in the TV series named R.L. Stine's The Haunting Hour as Amber. After three years she was cast in the series named Signed, Sealed, Delivered as Marie.

Her career started getting notable after she was cast in the TV series named Open Heart as Dylan Blake. After this, she was seen in several movies and series such as Witness Protection, Identity Theft of a Cheerleader, BH90210, New Year's Kiss, The Sinners, Upload, My Husband's Deadly Past, Cheer Squad Secrets.

Her upcoming project is Day to Night as Diana Sheen.