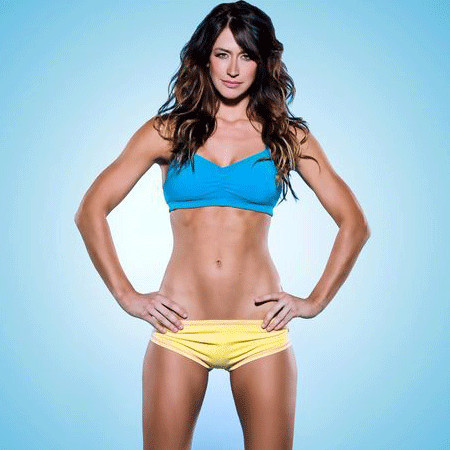 Karena Dawn who has been able to establish herself as a television personality, author and a fitness guru was born in Indianapolis, Indiana. She spent most of her childhood days in Indiana with her siblings.

Karen has an American nationality and is of the white ethnicity. She was always interested in fitness since childhood. Dawn enthusiastically made her first fitness video for a school project when she was 7 years old.

Dawn ran her first half marathon at the age of 12 and since then she has dedicated her life towards fitness. She finished her high school and then moved to Los Angeles. Karena began taking part in triathlons. She also began working as a certified personal trainer. Dawn then began working as a fitness model with top sport and fitness brands.

Dawn then met Katrina Hodgson in the Southern California gym and later in the farmer’s market and also in the seashore running trails. So they began talking and then ended up becoming business partners. Their reality show titled Toned Up ran in Bravo TV for one season. The two girls began running ToneItUp.com.

They then published their book entitled Tone It Up: 28 Days to Fit, Fierce, and Fabulous on May 5 thus becoming known also as an author. They sell workout DVD’s with a nutritional plan in it and also Perfect Fit protein powder. The two have collaborated with designers on bathing suits and sunglasses and more.

Karena is currently single. Not much about her dating history is known to the public. She is very focused on fitness and her role in the fitness industry that she has not really indulged herself in marriage and kids. She is not having an affair and does not have a boyfriend. Karena revealed in her show that she is fond of children.

She also said that she would like to have some but is currently engaged solely in her career and has not thought about raising kids so soon. She also considers herself to be young to have children right now. However, her business partner and former roommate, Katrina are already married.

She married her fiancé Brian. Karena was also present as brides made during the wedding and was quite happy for her friend. Karena is not seen with many men in the public. Thus it is hard to decide if she is single or is dating someone. Unlike other models, she has kept her life away from the eyes of the media and public.

Not even her former list of a boyfriend is known to anyone. She has not revealed it even on her show. The public and the media are unaware of her affair.

There arose a controversy when in an episode of Tone Up; Dawn talked about how she was previously addicted to drugs. She was in a dilemma at leaving the house that she owned with Katrina and her fiancé Brian.

She is known to have been featured in top editorial magazines such as Shape, Triathlete, Women’s Health, Fitness, In Style, Vogue, Oxygen, Muscle & Fitness, Self, Fitness, Women’s Health, Runner’s World, Competitor and more. Katrina and Karena prefer the brand Alice and Olivia for their fitness outfit.

Karena, being a fitness model has a well-built body. She has a body shape. Her figure is adored by both men and woman. She motivates another woman to be equally healthy as she is. Dawn believes that fitness saved her life and would save that of millions of others. Both Karena and Katrina earn huge salary coming from the fitness industry. Her net worth is estimated to be $2 million.

Karena and Katrina post lots of workout videos on their YouTube channel and have over 35 million views. They have two channels on Instagram, @toneitup, and @karenakatrina, which have over 400,000 followers.