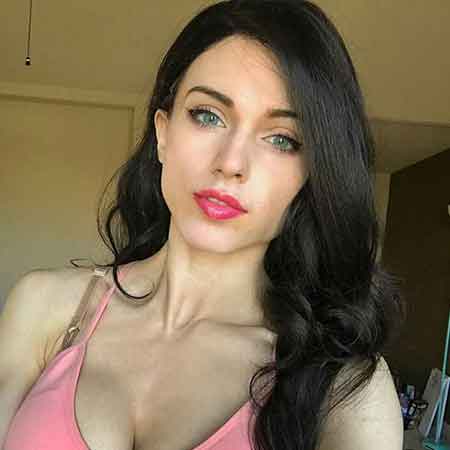 Kaitlyn Siragusa aka  Amouranth is a Houston, Texas-based social media star and Twitch Streamer. She is also a costume designer, character entertainer, and entrepreneur. She started her cosplay journey as a self-taught costume in 2010 which was discovered by the Houston Grand Opera and Houston Ballet.

Kaitlyn Siragusa was born on December 2, 1993, in Houston, Texas. She was born under the birth sign Sagittarius which defines her as a generous, idealistic, optimist personality. As far as her ethnicity is concerned, the social media star is White and belongs to American nationality. The information about her parents and siblings is still missing.

Siragusa spent most of her early days in her hometown, Houston along with her parents.

Kaitlyn Siragusa is a Cosplayer, Model, and Character Performer. The social media personality started her cosplay journey in 2010 after she was discovered by the Houston Grand Opera and Houston Ballet which eventually employed her-designed costumes in their costuming departments.  Then she started attending conventions to combine her passion for art to the next level.

Siragusa started her own character company for children's entertainment,  A Charmed Affair in 2015 which was commercially successful. She also made a couple of appearances on Discovery Network's TLC's The Little Couple. She is also quite popular on Twitch with 500k+ followers.

Kaitlyn Siragusa's Net Worth And Earnings

Kaitlyn Siragusa is a popular social media star and Twitch steamer. She has earned more than $50k from a modeling career, she also owned a company, "A Charmed Affair" from where she accumulated a good sum of amount. Considering her career, she has a good sum of net worth which can be estimated to be in the $6 figure as of 2019.

The cosplayer also has a massive fan following on her Instagram account with over 1.6 million followers. It also plays a major role in earnings.

Who is Kaitlyn Siragusa Married Too? Know Her Relationship Status

Kaitlyn Siragusa was rumored to married  Nick Lee at an intimate ceremony but she hasn't officially confirmed anything about her relationship status. After her fans discovered she was married, many of her fans seemed upset and started calling her fake.

Even more, several fans expressed their outrage on social media after finding she tied the knot to an Asian man. Many claimed that she lied about her marital status for thousands of dollars which her fans had been sending her every month.

It was also reported that Siragusa was once in a relationship with her rumored boyfriend Matt Barr. As of now, the Cosplay artist and a Twitch streamer are not dating anyone (publically).

Kaitlyn, who has over 500,000 followers on Twitch shares all sorts of content from her gym sessions to ASMR videos.

Kaitlyn Siragusa was blamed as a liar for hiding her marital status with her fans and taking away money from them.

On August 29 she claimed that someone is asking for  $2,600 per month just to ensure that her pictures are not removed from  Instagram. In June her dozen of the picture from IG has been removed for violating Community Guidelines.