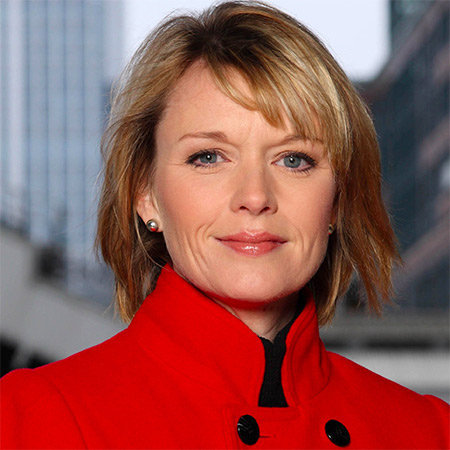 Julie Etchingham is a talented newsreader and journalist. She has earned popularity serving as a presenter for the children's news program named Newsround. She currently serves as Newscaster for ITV News at Ten.

Etchingham was born on 21 August 1969 in Leicester, Leicestershire, England. She is British by nationality belonging to the White ethnicity. She was raised in Leicester by Roman Catholic parents, who were both teachers.

Etchingham completed elementary and high school from English Martyrs Catholic School in Leicester. She then attended the University of Cambridge's Newnham College, where she graduated with a Bachelors's Degree in English.

During her stay at the University, she co-presented the student's program of BBC Radio Cambridgeshire's 'On the Edge,' which was produced by Ian Peacock.

Etchingham kick-started her journalism career by working for Leicester-based  BBC Radio, while she was a student and joined the BBC graduate program via university.

Shortly, Etchingham became a presenter for BBC Midlands' 'Midlands Today,' and later she was assigned to present a national channel in London. As a presenter, she had presented BBC's TV shows such as Breaking News, Newsround, and other programs.

In 2002, Etchingham joined Sky News to work as a host and presenter. Her credit includes Sky News Today, Five, and several Sky's programs. After working for years, she departed from Sky News and joined ITV on 31 October 2007.

In ITV, Etchingham was hired to co-present its news program called 'News at Ten' alongside Sir Trevor McDonald. In October 2009, it was announced that Julie Anne will be presenting a relaunched Tonight program from early 2010 and added that the show will be broadcast once a week on Thursday.

In March 2015, it was announced that Julie Anne would chair a televised leaders debate for ITV ahead of the 2015 general election, the only leader's debate featuring Prime Minister David Cameron to be held that year. The debate took place on 2 April. She later co-presented the ITV coverage of the general election with Tom Bradby.

In October 2015, News at Ten relaunched and returned to the single newscaster format, with former political editor Tom Bradby. Julie Anne continued to serve the program as Deputy Anchor with Rageh Omaar. In June 2016, she appeared as the chairwoman for Cameron and Farage Live: The EU Referendum and The ITV Referendum Debate.

Etchingham's way of presenting news has been praised by many critics and was honored with various awards, including the 2010 and 2016 Royal Television Society for 'Presenter of the Year' and was named 'Broadcast Journalist of the Year' in April 2016, by London Press Club.

Etchingham is a married woman. She is a Roman Catholic. She married Nick Gardner, a television producer. The couple married in 1997. They first met while working on the BBC's program named Newsround.

The couple is blessed with two children. She gave birth to her sons in Hammersmith and Fulham.

Etchingham is active on social works as well. She is an ambassador of the trust named The Prince's Trust. She is also a Vice President of the stillbirth charity named Abigail's Footsteps. Moreover, she serves as a Patron of the East London homeless charity named Caritas Anchor House.

Etchingham is also active on several social media like Twitter, where she updates news-related and her interest.