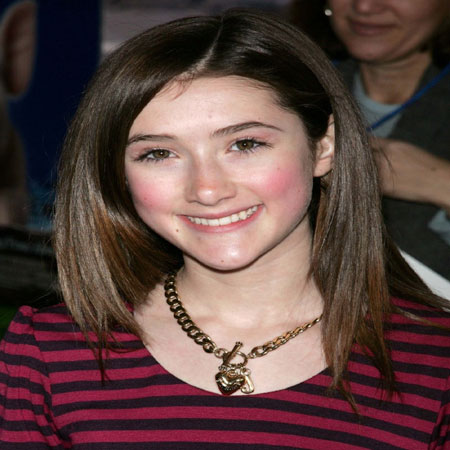 Julianna Rose Mauriello is an American actress, singer as well as a dancer who appeared on Broadway in A Tree Grows in Brooklyn, Oklahoma!, and Gypsy. Particularly, she is famous for her role in the TV series, Lazy Town. Moreover, Mauriello was nominated for a 2006 Daytime Emmy Award for her performance in Lazy Town, a children's television series. She has also appeared in few movies including A Fix and Hip Hop Kids: Hip Hop Homeroom Math.

Julianna Rose Mauriello was born on May 26, 1991, in Irvington, New York under the birth sign Gemini to Italian-American parents. She holds an American nationality and mixed ethnicity.  She has Irish, Italian, and German ancestry. Mauriello grew up with her sister named Alex who also is an actress and a brother.

Regarding her academics, Mauriello went to New York City’s Performing Arts School. She later shifted to Manhattan with her family. Currently is enrolling at Columbia University where she has been doing her master's degree in Occupational Therapy.

Julianna has been influenced in the world of the entertained industry since her birth as most of her family member is involved there. So due to this reason, she has been working over there since the early days.

She loves dancing and studies ballet, tap, jazz, tumbling, and Irish step dancing. Her favorite rock band is U2.

Born into a family with a background in performing arts, Julianna Mauriello was attracted to it at a very young age. She appeared as a child in a party scene of the Nutcracker at SUNY Purchase. In 2002, Mauriello made her stage debut after getting into contact with her first agent, Nancy Carson. Her first role was of Lil Titch in the revival of a Rodgers & Hammerstein classic, Oklahoma! After that etc.

Mauriello got the role of Stephanie in the Nickelodeon series Lazy Town that made for children in 2004. The girl who was originally cast declined to work for the series and that is how Julianna got lucky and received her breakthrough. She was the main character of the children's sitcom and it aired from 2007-14. The series starred Stefan Karl Stefansson, Magnus Scheving, and Chloe Lang.

After moving to Iceland for her shoots, Mauriello worked as the presenter for Iceland’s EDDA Awards. She made appearances in broadcasts and presentations in around 70 countries and 5 continents.

Mauriello was a part of an educational film made in 2006. It was named Hip Hop Kids: Hip- Hop Homeroom: Math. She also acted in the 2008 film A Fix.  After ending her sitcom Lazy Town in 2014, she has not appeared on the small screen as well as big-screen projects.

Julianna Rose Mauriello's net worth is around $2 million according to Celebrity Net Worth. Her primary source of income is her acting career and she earns a huge amount of salary from television series as well as movies.

She has also been involved in various charitable and social movements.

Julianna Mauriello has not confirmed her relationship status as of 2021. She is very mum when it comes to her possible partner and boyfriend details.

Moreover, Mauriello is not quite active on social media, however, whenever she is, the actress mostly shares about her family and lifestyle. She is also a dog lover. In January 2018, she brought a little nugget into her home.

In addition, she loves traveling and adventure activities. She prefers to go out with her colleagues and to walk around the city on her scooter.