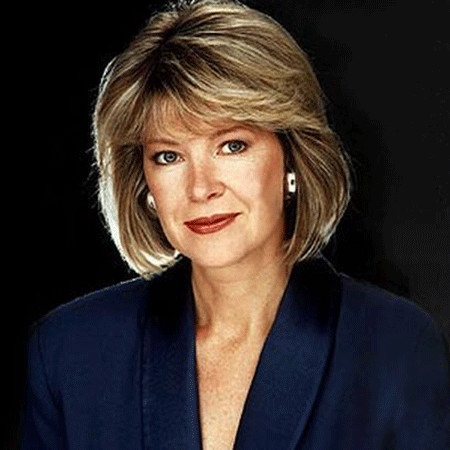 Julia Mary Fownes Somerville better known as Julia Somerville was born on 14th July 1947 in Wells, Somerset, England. She is a reporter and also a television news reader. She has worked for BBC as well as ITN.
Julia Somerville holds English nationality and falls in white ethnicity.

Julia attended Airthrie Preparatory School in Cheltenham followed by Headington School in Oxford. In 1969 she has completed graduation in BA English Literature from the University of Sussex.

After completing graduation Julia started working on Homes and Gardens magazine of IPC publisher. After that, she was an editor of a computer group's magazine for two years.

In the year 1972 Julia joined BBC as a sub-editor in the radio newsroom. In 1978 she was promoted to the post of the reporter. She then became Labor Affairs correspondent in 1981 and in 1983 she joined BBC Television News. She co-presented the BBC Nine O'Clock News and became one of the most recognized faces on the television.

She then joined ITN in the year 1987, there she was a presenter of News at Ten and co-presented the Lunchtime News.  She has also presented a weekly ITV current affairs program 3D.

In the year 1992 Julia Somerville was diagnosed with the brain tumor but after the neurosurgery, she recovered. After recovering she was one of the members of the News at Ten. There she worked for 32 years until 1999.
Until October 2001 Julia worked at ITN presenting ITV Lunchtime News along with John Suchet. For the ITN News Channel, she was the launch anchor.

From the year 1999 to 2001 she presented a daily program LBC. It was a two-hour program where diverse artists were interviewed.
Julia Somerville is very interested in painting and for the National Portrait Gallery's BP Portrait of the Year, 2001 she was one of the members of the judging panel.

For several years, she served as one of the judges on the RIBA Annual Architecture Awards Panels. For four years, Julia was appointed as the Chair of the Advisory Committee of the Government Art Collection in 2003.

In 2013 Julia Somerville received the OBE award for her work in Chairing the Advisory Committee on the Government Art Collection.

Julia Somerville has married three times till date and her first husband was Stephen Band. She got married to him in 1970 and the couple got the divorce in 1975.

Julia was then married to Ray Gowdridge in 1984, however, divorced in 1992. She has two children named Joseph and Rachael from her second husband. Currently, Julia is married to Sir Jeremy Dixon. Her current husband is an architect. She also has a daughter.

When Jeremy went to collect the pictures, police were waiting for him and later on his house was searched. Both Julia and Jeremy were suspects and both were further enquired. However, the allegations were dropped later.